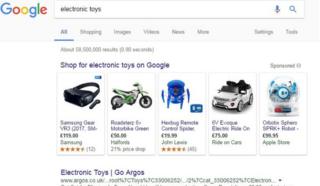 Google’s appeal against a huge fine imposed by the European Commission over its alleged abuse of power in promoting its own shopping comparison service will be heard over the next three days.

The hearing will take place at the General Court in Luxembourg.

It argues that the case has no legal or economic merit.

In a statement to the BBC, Google said: “We’re appealing [against] the European Commission’s 2017 Google Shopping decision because it is wrong on the law, the facts, and the economics. Shopping ads have always helped people find the products they are looking for quickly and easily, and helped merchants to reach potential customers.

“We look forward to making our case in court and demonstrating that we have improved quality and increased choice for consumers.”

The BBC understands the tech giant will argue that it fulfilled its legal obligations to allow rivals access to its products.

It will also argue that the EC excluded key players such as Amazon from its investigation. It will claim the online role of comparison shopping services has diminished, largely because platforms such as Amazon have become the preferred place to look for products and compare prices.

In order to comply with the EC’s ruling, Google changed the shopping box displayed at the top of search results. It now shows its own ad results but also gives space to other shopping comparison services, which can bid for advertising slots.

The European Commission will be supported in its case by shopping comparison sites Kelkoo, Twenga and Foundem, among others.

Foundem, the lead complainant in the case, filed its complaint against Google back in 2009.

In a statement, Kelkoo told the BBC it stood “ready to support the European Commission during the hearings”.

“We believe in the merits of the shopping decision and its potential to deliver a fairer market for European consumers and businesses. At the same time, we continue to call for a remedy which tackles the harm caused by Google’s abuse and we will endeavour to work closely with the Commission in the coming months to make this happen.”

Google has amassed fines of €8.2bn from the EC in the last three years, all relating to alleged abuses of power.

Along with other tech giants like Facebook, Amazon and Apple, it also now faces anti-trust investigations in the US.

If its appeal is upheld it will be a big blow for the EC’s competition commissioner Margrethe Vestager, who has taken a tough stance on the Silicon Valley tech firms and what she sees as their monopolistic grip on the digital landscape.

It is expected that the court will deliver its judgement in the second half of the year.