Government to pledge £5bn for bus services and cycling routes 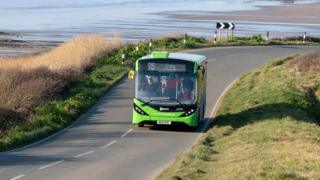 The government is set to pledge £5bn over the next five years to improve bus and cycling services in England.

In the House of Commons on Tuesday, the prime minister will say the extra money will provide more frequent services and simpler, more affordable fares.

But Labour has accused the PM of refusing to reverse “£645m-a-year cuts to bus budgets, which have caused thousands of routes to be axed”.

This comes as the government is set to give the go-ahead to the HS2 project.

Prime Minister Boris Johnson is expected to set out details of the high speed rail link and the new money for cycling and buses in a statement to the Commons on Tuesday.

In addition to improving frequency and fares, he will say the £5bn of funding will go towards new priority routes for buses and 4,000 “zero-emission buses” in England and Wales.

British Chambers of Commerce director general, Adam Marshall, welcomed the funding and said: “Business communities will want to work with central government, local government and bus operators to ensure that this new funding makes a real difference on the ground.”

On cycling, Mr Johnson is expected to promise to create 250 miles of new cycle paths and plans to make cycling safer in towns by expanding projects dubbed “mini Holland” schemes.

The funding will go to regions outside of London.

Ahead of his Commons statement, Mr Johnson said: “Improving connectivity by overhauling bus services and making cycling easier than ever is such an important step forward, to make sure every community has the foundations it needs to thrive.”

But shadow transport secretary Andy McDonald said: “After years of underinvestment and cuts, this unambitious announcement is nowhere near enough to make the difference that transport users, our economy or our environment need.

“Such paltry investment in cycling won’t be enough to stop the UK lagging behind similar European nations for cycling participation.”