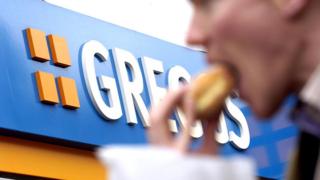 Greggs has signed a deal with Just Eat as the High Street food giant expands home deliveries across the UK.

The tie-up comes after trials with other delivery firms such as Uber Eats and Deliveroo in Newcastle, London and Glasgow last year.

The service will now also be launched in Birmingham and Bristol, with other UK cities to follow.

Greggs chief Roger Whiteside said the firm aimed to be able to deliver across the country by the end of the year.

The announcement comes as the market for home deliveries continues to grow.

Just Eat – was originally founded by a group of five Danish entrepreneurs in 2000 – said the partnership with Greggs showed that firm was expanding “beyond traditional takeaways”.

It added that its customers can also order from High Street chains such as KFC, Subway and Wagamama, as well as receive pizza deliveries from selected Asda supermarkets.

The size and popularity of the takeaway delivery market was demonstrated by the recent takeover battle for Just Eat between Dutch company Takeaway.com and investment firm Prosus.

After several months of courting Just Eat’s shareholders, Takeaway.com finally triumphed and bought the firm in a £5.9bn deal.

Takeaways maybe used to be reserved for a Friday night, but recent research shows people are ordering them more often.

A recent survey by KPMG suggests that two-thirds of adults in the UK enjoy them at least once a week.

Typically, people in the UK order 34 takeaways a year, spending between £10 and £15 a time.

Will Hawkley, global head of leisure and hospitality at KPMG, said the increased spending was down to a “lifestyle change”.

Mr Hawkley added this was a positive for those with “specific dietary requirements that may have previously prevented them from ordering in.”