Half of all debit card payments now contactless 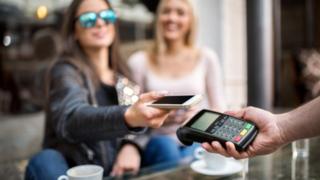 Contactless payments have become so popular among UK consumers that they accounted for half of all debit card transactions in July.

It is the first time the 50% level has been reached, according to figures from banking trade body UK Finance.

Contactless allows consumers to pay by placing their card, or smartphone, near the merchant’s machine, without the need to enter a PIN.

It was used 647 million times on debit cards during the month, the data shows.

The technology was adopted relatively slowly by consumers in its early years, but widespread use on public transport has given it a significant push.

The use of contactless – which includes cards loaded onto smartphones – outstrips debit card payments using a PIN, as well as online transactions.

Concerns have been raised about the potential harm for those without a bank account, and therefore without a card, if the move to such technology comes at the expense of cash.

Iona Bain, founder of the Young Money Blog, said: “The jury is out about what this means in the long-term for consumers.

“We have to think about the unbanked customers in the UK. They are very much reliant on cash. The rise in contactless technology risks leaving behind rural and poorer communities.”

High credit card interest rates, and a safety-first approach from consumers, mean that the growth in outstanding credit card debt has slowed in recent months.

The UK Finance figures show that the annual growth rate stood at 3.67% in July.

This was down from a recent high of 8.3% in February last year.

Commentators have suggested the Bank of England’s base interest rate could be cut in the near future, but such a change might not feed through to better deals for borrowers.