Half of Chiquito restaurants under threat 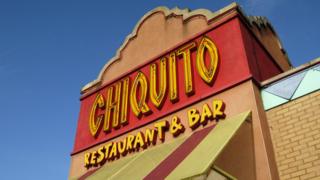 A group of Chiquito restaurants are under threat following a review by their owners, the Restaurant Group.

In March, it identified 76 Frankie & Benny’s restaurants in what it now considers to be unfavourable locations and it has now highlighted 42 more sites, which are mainly Chiquitos.

Restaurant Group reported a loss for the first half of the year.

It was caused by it writing down the value of restaurant sites seen as being “structurally unattractive”.

A spokesman told the BBC that as each restaurant’s lease came up for renewal, its future would be considered.

He added that Frankie & Benny’s and Chiquito, together with a few smaller brands, were “not aligned to where the market is going”.

“They are on retail sites, leisure parks and next to cinemas, and footfall is massively declining in those areas.”

He said the company – which has 356 sites in total – would be “highly disciplined in considering whether or not leases are renewed” as each one neared its end.

Restaurants would not definitely close, but each will be reviewed on a case-by-case basis.

By contrast, he said that Wagamama, which was bought by the group last year, was doing well because it reflected the increased consumer demand for convenient and healthy food.

The group’s like-for-like sales were up by 4% in the first half of 2019. Total sales jumped 58.2% to £515.9m, helped by the integration of the newly-purchased Wagamama restaurants into the business.