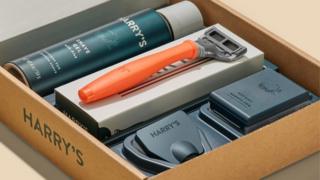 The planned $1.4bn (£1.1bn) takeover of millennial razor brand Harry’s has been pulled amid competition concerns.

Edgewell Personal Care, which owns brands such as Wilkinson Sword, had planned to buy its hipper rival amid a boom in the male grooming market.

But it said the threat of legal action by the US Federal Trade Commision (FTC) had caused too much “uncertainty”.

The regulator had warned the deal would harm competition and hurt consumers.

Harry’s, founded in New York in 2013, has helped to shake up the men’s grooming market, which has been long dominated by established giants such as Edgewell and Procter & Gamble.

The firm, which sells razors, as well as face washes, lotions and some women’s products, began as an online retailer before placing its products in stores in 2016.

The challenger brand now accounts for about 2% of the $2.8bn US men’s shaving industry, according to research firm Euromonitor.

The proposed takeover came amid an upswing in the male grooming industry, which has seen men spending more on skin creams, hair products and deodorants. It had spurred other mergers, including Unilever’s $1bn acquisition of Dollar Shave Club in 2016.

But earlier this month the FTC announced it would file a lawsuit to block Edgewell’s plan to buy Harry’s, saying it promised “serious harm to consumers”.

On Monday, Edgewell boss Rod Little said his firm disagreed with that view but did not have the resources to fight the lawsuit.

“Given the inherent uncertainty of a potential trial, the required investment of resources and time… we determined that proceeding with our standalone strategy is the best course of action for Edgewell,” he said.