Has the US flotation bubble burst? 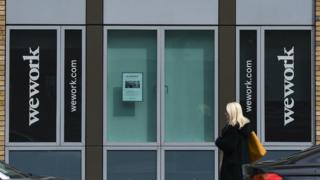 One of the most hotly anticipated stock market listings of the year – the flotation of office property rental firm WeWork – is now in doubt.

The uncertainty comes after the firm was reported to be facing pressure from its biggest external investor, Japanese firm SoftBank, to drop its flotation plans amid concerns about its plunging valuation.

The company was valued at $47bn (£38bn) last year, but reports have suggested it is now considering a price tag of less than $20bn.

Other high-profile and heavily loss-making companies – such as ride-hailing apps Lyft and Uber and messaging app Slack – have struggled to maintain their initial valuations.

The firms were part of a pack of much-touted “unicorns” – privately held start-ups valued at more than $1bn.

The trio launched their Initial Public Offerings (IPOs) this year in a blaze of glory. But while Slack is still trading near to the price it listed on the stock market, both Uber and Lyft are trading much lower.

Backed by venture capital firms and allowed to grow while enduring big losses, the firms have faced more scepticism since listing their shares.

So is the flotation bubble about to burst?

There are worries over prospects for global economic growth, given factors such as the US-China trade war and the uncertainty surrounding Brexit.

Some argue that in tighter economic circumstances, companies and consumers are likely to cut back their spending on things such as cab rides and workplace apps – not to mention spending on desk space hire.

Tech analyst Richard Kramer, founder of Arete Research, said: “They are obviously very different businesses, but the connecting thread is that they are losing money, burning cash and rely on sustaining very high growth rates over time.

“If there is anything that changed in the mood music, it is that multiple segments of the market are increasingly pricing in a recession.

“At the same time, these new IPOs [Initial Public Offerings] are reliant on continuous sales growth just to turn a first profit.”

He said Uber and Lyft were used on average some 30 times a year per person, which was not enough for the firms to make a profit.

“Getting to scale – meaning 50 to 100 rides per active user per year – requires a far larger share of what are discretionary consumer purchases. Uber and Lyft need customers to use them more and more, but in a tighter economy, this growth may be harder to come by.”

He added that the question that markets were now asking was: are these companies “recession-proof”?

The company has lost more than $4bn since 2016, burning through capital even as its revenues have doubled each year. WeWork said in its IPO filing that it could slow its expansion dramatically if it needed to become profitable.

So far, it has not made a profit, but since starting in 2010 it has grown rapidly, spreading to 528 locations in 111 cities in 29 countries.

Turning to Slack, he said the workplace communication app was in the unenviable position of competing with an offer from Microsoft.

“If you are buying Microsoft software for your business, you are already getting Teams built in,” Mr Kramer said.

Teams may not yet have all the features that Slack offers, but “buying Slack becomes an optional extra purchase”, he added.

Slack is also appealing more to “start-ups that want to use new tools”.

Mr Kramer concluded: “If you look at the forecasts for all these early-stage growth companies that IPO, they assume continuous growth, but the market is now pricing in a lower likelihood of uninterrupted growth, and therefore a much longer path to profitability than hopeful backers originally envisaged.”