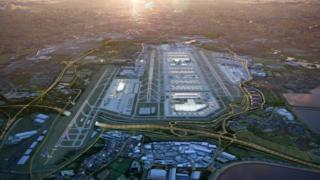 Heathrow has said its project to build a third runway has been delayed by “at least 12 months” after the aviation regulator rejected its spending plans.

The Civil Aviation Authority (CAA) has refused Heathrow’s request to lift spending from £650m to £2.4bn before it even gets planning consent.

The CAA is concerned passengers will end up shouldering the cost if Heathrow does not win permission to expand.

The airport now expects to complete a third runway between 2028 and 2029.

In a consultation published by the CAA, it said “the best approach in the interest of consumers” is to limit certain early construction costs to £1.6bn.

The consultation also said an assessment by an independent fund surveyor of Heathrow’s plan to open a new runway by 2026 was an “aggressive schedule” that would require “maximum activity” even before the airport knew whether it had been a development consent order.

Paul Smith, group director of consumers and markets at the CAA, said: “We believe that more runway capacity at Heathrow will benefit air passengers and cargo owners.

“However, we have also been clear that timeliness is not the only factor that is important to consumers.

“Passengers cannot be expected to bear the risk of Heathrow Airport Limited spending too much in the early phases of development, should planning permission not be granted.”

The CAA has approved Heathrow’s proposal to increase its spending on planning cost from £265m to £500m.

Heathrow said the CAA’s announcement was “an important milestone” in the expansion of the airport.

A spokesma added: “We will now review the detail to ensure it will unlock the initial £1.5bn to £2bn of private investment over the next two years at no cost to the taxpayer.

“While this is a step forward, the CAA has delayed the project timetable by at least 12 months. We now expect to complete the third runway between early 2028 and late 2029.”