‘Help us or you’ll kill the High Street’ 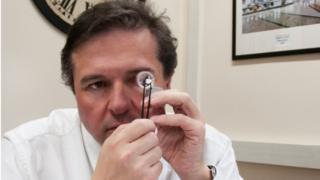 For one national chain of jewellers, the government’s business rates system is having a devastating effect on retail outside big cities and shopping malls.

“In a smaller town, if you lose a few retailers, you lose critical mass and there’s less reason for people to go into town,” he told the BBC.

“We have stores in various different locations – cities, towns, out-of-town shopping centres. But we fear for the future of smaller towns in more rural locations.

“If we don’t reduce the cost of doing business in these towns to a sustainable level, we will kill their High Streets.”

For that reason, F Hinds has joined forces with more than 50 other retailers to write a letter to Chancellor Sajid Javid calling for business rates reform.

The signatories include the bosses of leading supermarkets, department stores and other big High Street names.

Marks & Spencer, Superdrug, Morrisons, Debenhams, Boots and Greggs are among those involved.

The letter notes that the “burden of business rates has become unsustainable for many retailers” and that the system is broken.

Among other changes, they want businesses to be able to appeal against excessive business rates.

The system is a complex one, but businesses complain that changes in the rateable value of their properties can lead to their being unfairly clobbered.

Mr Hinds says the burden of the system falls disproportionately on retailers, who make up 5% of the economy but pay 25% of all business rates.

“For more than a decade, we’ve been opening new shops in larger places rather than smaller ones,” he says.

“The smaller towns that we’re in already are becoming less vibrant. Eventually, older people and poorer people will have less access to shopping, because they can’t drive 50 miles to the nearest supermall.”

F Hinds has 127 shops across the UK, which makes it too big to qualify for business rates relief from the government. Mr Hinds jokes that they would fare better if they could relaunch as 127 small businesses.

He says that if business rates are not reformed, many town centres will change radically.

“I think we will end up with a very different social fabric,” he says. “You can have other things in town centres apart from shopping, but if you lose shopping, will people go into the town to do the other things?”

The campaign has the backing of the British Retail Consortium, whose chief executive, Helen Dickinson, called on Mr Javid to address retailers’ concerns in next month’s Budget.

She said: “Every year, retail faces higher and higher business rates bills, holding back much needed investment in an industry that is transforming at a dramatic pace.

“Swift action at the upcoming Budget would show the chancellor was serious about levelling up all parts of the UK and supporting a retail industry towards realising a brighter future.”