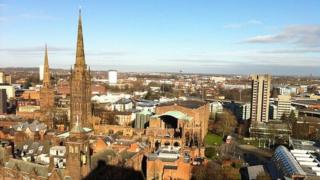 Historic English shopping centres will benefit from a £95m regeneration fund, the government has said.

In all, 69 towns and cities will receive money, with projects aimed at turning disused buildings into shops, houses and community centres.

The largest share of money, £21.1m, will go to the Midlands, with £2m going to restore buildings in Coventry that survived World War Two bombing.

The government said the move would “breathe new life” into High Streets.

The government’s Future High Street Fund is providing £52m of the money, while £40m will come from the Department for Digital, Culture, Media and Sport (DCMS). A further £3m is being provided by the National Lottery Heritage Fund.

Towns and cities had to bid for the £95m funding, which was first announced in May.

The announcement comes after figures showed that about 16 shops a day closed in the first half of the year as retailers restructure their businesses and more shopping moves online.

Lisa Hooker, consumer markets leader at PwC which was behind the research, said retailers had to invest more in making stores “relevant to today’s consumers”, but added that “new and different types of operators” needed encouragement to fill vacant space.

The government said the money would “support wider regeneration” in the 69 successful areas by attracting future commercial investment.

“Our nation’s heritage is one of our great calling cards to the world, attracting millions of visitors to beautiful historic buildings that sit at the heart of our communities,” said Culture Secretary Nicky Morgan.

“It is right that we ensure these buildings are preserved for future generations but it is important that we make them work for the modern world.”

Other major projects include a £2m drive to restore historic shop-fronts in London’s Tottenham area, which suffered extensive damage in the 2011 riots.

By region, the funding breaks down as follows:

You can read a full list of the towns and cities that will benefit here.

“Increasing competition from online outlets is putting High Streets across the country under growing pressure,” said the DCMS.

“As part of the government’s drive to help High Streets adapt to changing consumer habits, the £95m funding will provide a welcome boost.”

Responding to the move, shadow culture secretary Tom Watson said High Streets had been “decimated” by “a decade of Tory austerity”.

He added: “This funding pales in comparison to the £1bn Cultural Capital fund that Labour is committed to, which will boost investment in culture, arts and heritage right across the country, not just a few lucky areas.”