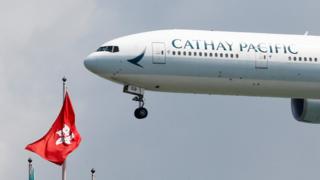 Cathay Pacific employees say they fear losing their jobs if they express support for pro-democracy protesters in Hong Kong.

Employees of the airline told the BBC that staff feared working routes to mainland China.

Some are considering bringing decoy mobiles with them in case their phones are checked on arrival in the mainland.

It comes weeks after China demanded the airline suspend staff involved in the protest movement.

Protesters have been taking to the streets of Hong Kong for the past 11 weeks. The demonstrations were originally against an extradition bill but have now evolved into a wider pro-democracy movement.

One cabin crew member who wished to remain anonymous told BBC Newsnight’s Gabriel Gatehouse: “We try not to talk about politics during a flight because you don’t know which colleagues are at your side. The company says that we should not support the ‘illegal’ protests.

“So if somebody who is pro-China finds out you went to the protest, they find some way to report you to the company. Maybe not for a political issue but for some safety issue that might mean you lose your job. So we are not able to talk in the flights.”

Some fear being detained while working routes to mainland China.

A member of the Civic Party, Mr Tam said his resignation was aimed to stopping any additional political pressure placed on the company due to his political beliefs.

“You can tell, this climate of fear is all over Cathay Pacific. There is a lot of fear, they worry about their Facebook accounts, they worry about anyone capturing their messages, people who could spy on them and give their name to management. That kind of fear is still happening and spreading rapidly,” Mr Tam told the BBC.

He added that some members of staff have changed their social media accounts so they are not at risk.

Cathay’s story is a cautionary tale of what happens to businesses in Hong Kong when you don’t factor in what China wants.

In a sense, it’s a distorted reflection of what’s happened in Hong Kong. From unrest to protests to an embattled leader – but this one, Rupert Hogg, stepped down.

Its predicament highlights the precarious position that big business in Hong Kong now finds itself. Some staff members who don’t want to be named have described the atmosphere there as working ‘in a climate of fear’. Whatever the truth is, it’s clear that businesses are playing it safe.

Today, some of the biggest banks in the world are putting out front page ads in Hong Kong’s papers condemning the violence in Hong Kong. But they are also pledging their support to China’s growth and development.

The reality is that China is a massive market for these companies – one they cannot afford to ignore. These are the sorts of difficult calculations that international companies are now making about operating in Hong Kong.

It is, as one risk consultancy firm told me, a binary choice. Either stay in Hong Kong and toe the Chinese Communist Party’s line – or leave.

Augustus Tang, the new CEO of the airline, told staff on Monday that there was “zero tolerance for illegal activities” or policy breaches.

In a memo to staff, he said: “The way every single one of us acts, not only at work serving our customers but also outside work – on social media and in everyday life – impacts how we are perceived as a company.”

Mr Tam said: “How can you control people who are doing this in their own time? This is not Hong Kong at all. We have freedom of speech here. We have our own jurisdictions and our own common law.

“We stand together through the good times and bad times. During the Second World War and Japanese occupation and during the Asian Financial Crisis of 1997.”

The BBC has contacted Cathay Pacific for comment. The company earlier told Reuters that it would not comment on internal staff matters.

A guide to the Hong Kong protests