Hound of Hounslow: Who is Navinder Sarao, the ‘flash crash trader’? 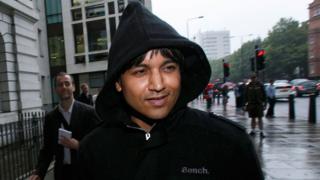 Dubbed the “Hound of Hounslow” in an ironic reference to the famous “Wolf of Wall Street” fraudster, the Briton was shown leniency by a Chicago judge due to the extraordinary circumstances of his case.

But who is he – and how did he help cause markets to plunge almost 4,000 miles away?

Who is Navinder Sarao?

Now 42, Navinder Sarao is a self-taught stock market trader who helped cause panic in US markets in 2010 from a bedroom in his parents’ home in Hounslow, West London.

He was arrested in 2015 for his part in the “flash crash”- in which financial markets briefly plummet in value. In this case it lasted less than an hour, wiping almost $1tn off shares before markets recovered.

Sarao then spent four months in Wandsworth prison before being extradited to the US. Unusually, he was allowed to return to the UK before sentencing, where he has been helping authorities catch other market fraudsters.

Despite the nickname, his life could not have been more different from that of the flashy “Wolf of Wall Street” trader played by Leonardo DiCaprio in the 2013 film. He made no ostentatious purchases and ended up losing a great deal of his money to fraudulent investors.

How did he make $40m from his bedroom?

Sarao’s fortune was partly made by artificially manipulating the stock market to make money.

The “flash-crash trader” used specially adapted software to remotely trade on the Chicago Mercantile Index. He bought and sold contracts that effectively speculated on the value of the top US companies.

On this index, every time an order was placed to buy or sell, “high frequency traders” – many of them not human but computers running algorithms – would try to make their own trades milliseconds before those orders could be executed. That way, they could be the first to make money from market changes.

Sarao realised that the high frequency traders all used similar software. That made the market twitchy – like a flock of sheep, all moving in the same direction.

His software took advantage of this by placing thousands of orders before quickly cancelling or changing them, once he had created artificial demand for other traders to buy or sell that asset.

This practice – known as “spoofing” – allowed him to make genuine buy or sell orders at a profit as the price swiftly rose or fell.

By feinting one way, he could make the market move in one direction, only for the “Hound” to disappear, nip around the back of the pack and pick up a quick profit, leaving the high frequency traders with nothing.

What has he been convicted of?

Sarao pleaded guilty to one count of electronic fraud, and one count of “spoofing” – which is illegal in the US.

He initially faced 22 charges, which carry a maximum sentence of 380 years.

But prosecutors ultimately decided not to push for a jail sentence, as Sarao didn’t spend the money on any luxuries and had quickly lost his windfall to fraudsters.

They also took into account his autism, time in jail already served, and that he has been helpful to the government for several years since then.

How common are these types of crimes?

Potentially fairly common. Most countries, including the UK, do not specifically list spoofing as a crime. It has only been illegal in the US since 2010, with the first successful case brought against US trader Michael Coscia in 2013.

These cases expose the sometimes blurred distinction between legal and illegal market manipulation. After all, a traders’ job is to exploit mispricing in the markets – that’s how they make money, although it’s supposed to be because they are taking a view on the economy or on an individual stock.

What’s more, algorithmic trading in itself isn’t illegal: it’s increasingly common practice in markets when you want to make a large volume of bets, because it allows you to move faster than a human trader ever could.