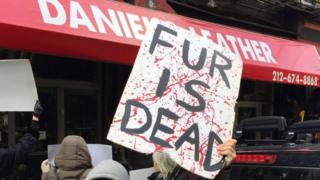 An animal charity says House of Fraser is “painfully out of touch”, after it started selling fur products.

The company, taken over by Sports Direct CEO Mike Ashley last year, said in a statement in 2017 that it had a “strict no-fur policy”.

There was backlash online and outside shops on Monday after garments were found to be lined with fur.

The Humane Society International/UK accused the store of losing its “moral compass”.

Customers expressed anger when they found coats trimmed with rabbit fur in store, and on House of Fraser’s website there are hats for sale made from 100% raccoon fur.

In August last year, Sports Direct said it regretted buying House of Fraser in 2018, after it was hit by a big tax bill.

The animal protection charity labelled the department store “House of Horrors” and criticised what it calls a “short-sighted and misguided strategy”.

House of Fraser’s no-fur policy was still in place in 2017, when an investigation found items marked as fake fur were actually made with real fur.

The product was removed and the company apologised.

A spokesperson told HuffPost UK, at the time: “House of Fraser has a strict no-fur policy and we ensure all of our suppliers and brand partners are aware of this.”

Last year, fashion brand Burberry announced it would stop using real fur in its products, while Gucci ditched fur in its spring-summer 2018 collection.

They join brands like Prada, who says it will stop using fur next year, and Selfridges which has banned the sale of exotic animal skins like alligators and crocodiles.

Even the Queen decided this month to only buy clothes that have fake fur on them.

Sports Direct Limited have not responded to our request for comment.