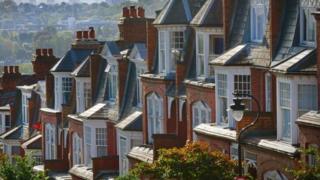 House prices are rising at the slowest annual pace for more than six years, according to the Halifax.

The mortgage lender, part of Lloyds Banking Group, said prices rose 1.1% in the year to the end of September, the slowest rate since April 2013.

Price growth would remain “subdued” for as long as economic uncertainty in the UK continued, the Halifax said.

Any stagnating or falling prices will be welcomed by first-time buyers, many of whom feel that the cost of owning a home in some parts of the country is out of reach.

However, the housing market is far from uniform across the UK, with a wide range of prices for similar properties, and the affordability difficulties for many come when trying to secure a mortgage.

The Halifax, which uses house price figures based on its own lending data, said that prices had been “predominantly flat” in recent months.

This mirrors the results of a string of other housing surveys, with rival lender the Nationwide saying a week ago that house prices in September “almost ground to a halt”.

Russell Galley, managing director of the Halifax, said: “Looking ahead, we expect activity levels and price growth to remain subdued while the current period of economic uncertainty persists.”

Relatively strong wage growth and low interest rates had maintained some demand, meaning there had been no significant house price falls in terms of the UK average.

Michael Biemann, chief executive of online mortgage lender Selina Finance, said: “The current political climate is more febrile than it has been for decades and so while annual house price growth may be at a six-year low, that the market is hanging in there is a positive.

“The impact of Brexit uncertainty is being offset by the strong economic fundamentals. People have also become philosophical as the Westminster farce plays out. You can’t put your life on hold indefinitely and many people have been holding out for three years already.”