House price growth over 1% for first time in a year, Nationwide says 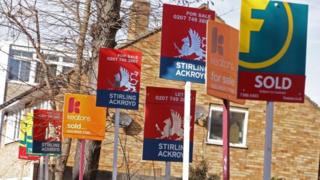 House prices rose by 1.4% over the course of 2019, according to the Nationwide, marking a relatively static year for property values.

The rise in the year to the end of December was the first time the annual increase in prices was above 1% for the whole year.

Slow price growth would be welcomed by many first-time buyers.

But the building society’s figures show that raising a deposit remains a significant hurdle.

To raise a deposit of 20% would take up the entire pre-tax annual income of a typical earner, the Nationwide said.

The building society, which draws the figures from its own mortgage data, said that house prices rose by 0.1% in December compared with the previous month. This meant the average home was valued at £215,282.

Robert Gardner, Nationwide’s chief economist, said that housing market activity had been slow but relatively stable during the year.

Strong employment levels and historically cheap mortgages had maintained demand despite uncertainty in the economy, owing to the global picture and the debate over Brexit.

Commentators suggest the result of the general election should provide some short-term clarity over the Brexit process and some more demand for housing.

“These are early days for a bruised and fragile market, but with plenty of pent-up demand and supply, price growth may quickly accelerate past 2019’s modest annual pace,” said Jonathan Hopper, managing director of Garrington Property Finders.

“Nevertheless these first few months of 2020 will be all about establishing what the new norm really looks like in different parts of the UK.”

Jonathan Samuels, chief executive of lender Octane Capital, said: “London may have been the weakest performing region in 2019 but that may well change this year. The capital certainly won’t be returning to the obscene growth rates of yesteryear but it may drag itself off the bottom of the table.

“The property market has entered 2020 on a positive note but all eyes will be on how the economy holds up as we exit the EU.”

Saving for a deposit

Potential first-time buyers will not want prices to rocket, given the difficulty already in saving for a deposit.

The Nationwide suggests that anyone trying to put money aside for a 20% deposit to buy a typical first-time buyer property faces years of saving.

If they set aside 15% of their take-home pay each month it would take more than five years to raise the money for a home in the North of England and Scotland.

In Wales and Northern Ireland, it would take prospective buyers nearly seven years, and almost eight years for people living in the West Midlands.

That increases to nearly a decade in the South of England, and around 15 years in London, the building society said.

As a result of that pressure, a greater proportion of first-time buyers now rely on financial assistance from family and friends.