Housing ladder: ‘We live apart to save more money to buy a home’ 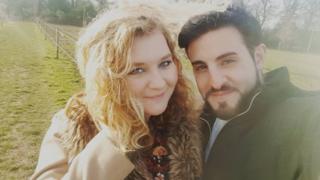 Owning their own home feels like a distant dream for Andre Armenian and his fiancée Siân Webb. But they are determined to get on the housing ladder and are making big sacrifices to take that step.

For a start, says Andre, personal circumstances mean they save more of their wages by living about 35 miles apart in their parents’ houses – him in St Albans, Hertfordshire, her in Romford, Essex.

“Renting is astronomical – if we did that it would be a decade before we could buy a home,” says Andre, 29.

“The path ahead of us is very daunting. We are laden with student debts, our incomes are not particularly high, our commuting costs are high, and house prices are becoming more and more disproportionate to incomes.”

He and Siân, about to turn 28 years of age, reckon a £25,000 deposit will secure them a terraced house in need of repair somewhere within easy commuting distance to London. But he says: “At times, it feels like we’re racing against the clock.”

And this week’s revelation that a government plan to create 200,000 so-called starter homes in England for first-time buyers under 40 years old had resulted in no homes being built has underlined feelings that the market just isn’t working.

That scheme, included in the 2015 Conservative Party manifesto, is one of many programmes announced with much fanfare that have fallen away, says MP Meg Hillier, chairwoman of the Public Accounts Committee, which produced this week’s starter home report.

While the door may have closed on this starter home promise, other schemes to help home buyers have had a longer shelf life.

Andre and Siân opted for a Lifetime Isa – a tax-free individual savings account that people can put towards buying their first home (or retirement).

But what are the other options, and are they enough to get people on the housing ladder? And is it, as housing charity Shelter argues, sensible to keeping promoting home ownership when it will remain out of reach for so many people?

This will be closed to new savers from 30 November. Since December 2015, first-time buyers can get a 25% bonus from the government with this account when they withdraw money saved to buy their first property. The maximum purchase price is £250,000, or £450,000 in London.

Critics say the scheme just increases housing demand – not the supply of new-builds – and has bolstered the profits of house building companies.

But analyst Kate Faulkner, who runs the consultancy Designsonproperty.co.uk, says Help to Buy Isas have been successful, helping 220,000 people onto the property ladder and with about one million holding the savings accounts.

This scheme allows buyers access to a loan equivalent to 20% of the purchase price, or 15% in Scotland, or 40% in London. The loan is interest-free for the first five years, and the applicant can only buy a new-build property.

There are worries, though, that using an equity loan can add an extra 10% on average to the price of a house, according to recent analysis by home-moving service Reallymoving.com. Because buyers have access to a larger deposit, house builders have been found to have pushed up prices.

Tenants renting homes from the local council can buy them at a discount. This has been extended to housing association tenants in England.

The level of the discount depends on the type and location of the property, and is generally only available to people renting from a council or housing association for three years.

The scheme draws political fire, though. Selling council houses when the waiting lists are growing is not the way forward, say critics.

And there’s concern many properties have ended up in the hands of private landlords. Right to Buy “has failed miserably” in Ms Faulkner’s view.

This is a cross between buying and renting. It lets borrowers buy between 25% and 75% of a property, and pay rent for the remainder.

The homes offered are usually new-builds or those being resold by housing associations in England. Over time, occupiers can buy a bigger share of the property when they can afford to.

It certainly works for some, with more than 200,000 UK households estimated to be in shared ownership.

But until you own 100% of the property you are effectively a tenant and could lose the home if you don’t keep up rent payments. And there are often maintenance and service charges too.

Despite an array of schemes and incentives, the fact that so many young people complain about the unaffordability of housing suggests the system isn’t working.

She points out there are housing shortages in some areas, but not others.

And often, prices are not the issue – it’s high deposits. A Halifax/YouGov poll found that, with the average deposit put at £41,000, 64% of non-homeowners felt raising the money was the main hurdle.

Some argue the very focus on home ownership makes things worse. Shelter, which focuses on the acute end of the housing crisis, says many schemes just help people who would probably ascend the housing ladder anyway.

Shelter’s head of policy Chris Wood says: “We need to end the idea that home ownership is possible for everyone. Analysis says that half of the people in their early 30s will never be able to afford their own home.”

His answer? “We have to build more social housing – 90,000 houses a year. Governments have done it before, and could do it again. It requires long-term planning and investment. But research shows it pays off.”