How an economist helped thousands get a new kidney 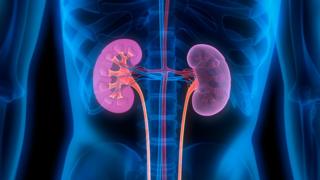 If you have needed a kidney transplant in the last few years your chance of getting one has improved dramatically because of an economist called Alvin Roth.

Roth has revolutionised kidney donation around the world by using an economic theory to make kidneys more available.

Without his intervention thousands of people a year who are walking around with a new kidney would either still be suffering, on dialysis or dead.

Donating a kidney is different to other organs as humans have two but only need one to function, so living donation is possible.

You may want to give your loved one who needs a kidney one of yours but often the types of kidney will not match.

Before Prof Roth’s intervention you would have to wait for a donation from somebody who’d just died or continue without one.

His idea was for a “kidney exchange” where pairs of donors with kidneys which do not match are put together with other non-matching pairs so that everyone who was donating was able to find a matching recipient.

There have even been examples of chains of donations, where up to 70 kidneys are swapped in a chain with 70 recipients.

Selling kidneys is illegal in every country but Iran because ethically most governments do not want to make it legal for people to harvest body parts for money.

“Kidneys are a market where almost everywhere in the world we don’t let prices play any role,” says Prof Roth when we meet. When I ask about the impact his market has had, he gives one example, saying that about a thousand kidneys are found for people in the United States every year.

The impact of his idea has resulted in Prof Roth being awarded the Nobel Prize in Economics.

We meet in Berlin as Nobel laureates and other luminaries gather to discuss the future of healthcare. Alvin Roth is there in part because Germany is one of the only major industrialised countries where kidney exchange is not lawful.

“I think that the bureaucratic rules and regulations for kidneys as for every market have to be revisited from time to time in the in the light of new developments, and should be modernized and adapted to current capabilities,” he says.

When contacted about the issue the German Health Ministry tells me that they are planning to organise a public debate on the issue but have no schedule for that yet.

Prof Roth says he understands the concerns behind the German ban. “They’re worried about organ trafficking.

But Prof Roth also sees a way that in the future people might be able to be paid for their kidneys.

He compares the debate to the one had in the US after the Vietnam War when the country switched from the draft – or compulsory military service – to an all-volunteer military.

Alvin Roth envisages a future where people who wish to donate a kidney for money could be conceived as “heroes” by the state which would gather the kidney and distribute it in the way that organs are distributed now – so kidneys would not be given on the basis of wealth but on current organ donor needs.

Yet offering financial incentives for organs is an ethical argument that many – both outside and in the medical establishment – are against.

A pilot programme where medical costs were paid for kidney donation or exchange between recipients in high income countries and donors from low or middle income countries failed to win the support of the World Health Organization.

Peter Singer who recently contributed to a piece in The Lancet supporting the scheme told the BBC that one exchange had happened through the scheme.

Prof Roth is a supporter of the programme, and says: “It’s a shame when people die because of bureaucracy.”