How China-US rivalry is dividing the internet 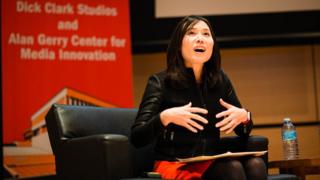 When Hyunjin Seo visited Beijing in July last year, she scrolled through Google News on her smartphone and discovered several reports about an attack on the city’s US embassy.

An associate professor at the University of Kansas’s journalism department, she bypassed China’s strict digital media censors thanks to the roaming plan of her US phone firm. This allowed her to access websites such as those from Google not available in China.

“I was telling my Chinese friends about the bomb detonating outside the [US] embassy and they didn’t know what I was talking about, because this news wasn’t appearing in their search feeds,” recalls Prof Seo, who teaches courses on digital media.

Rivals is a season of in-depth coverage on BBC News about the contest for supremacy between the US and China across trade, tech, defence and soft power.

Her experience is common for any westerner visiting China.

The internet in the world’s most populous country is heavily restricted and censored, leading experts to speculate that in the future there could be two distinct internets – one led by China and one by the US.

The point was made last year by former Google chief executive Eric Schmidt.

At a private event, when an economist asked Mr Schmidt (now a board member of Google parent company Alphabet) about the potential of the internet fragmenting into different sub-internets with different regulations, he replied, “I think the most likely scenario now is not a splintering, but rather a bifurcation into a Chinese-led internet and a non-Chinese internet led by America.”

They also can’t read online information on the Tiananmen Square massacre or criticism aimed at President Xi Jinping. Even online images of Winnie the Pooh have been banned in China after protesters compared President Xi’s face to the classic Disney character.

“In one of the biggest markets in the world, tech companies are leaving because they can’t fully operate how they want to, by freely sharing information online,” notes Ms Seo.

Such censorship means overseas businesses are hampered if they want to expand into China – one of the most attractive markets in the world.

No matter the size of the company, to operate in China overseas firms have to jump through hoops that can cause them problems.

While Apple services and products are available in China, the California-based tech giant has sparked controversy over its activities in the Chinese market. In 2017, China asked Apple to remove the New York Times and Skype app from its App Store. Apple complied.

Google has also waded into Chinese waters, only to be met with intense criticism. Most notably, Google secretly worked on a version of its search engine to go up against Chinese-born Baidu.

The Chinese-only Google would censor some results relating to human rights violations and controversial laws. “Project Dragonfly” was uncovered in a 2018 article by The Intercept, and Google eventually scrapped the project.

“When you enter search terms in China on their search engine, you get a different result from what you see in the West,” says Sarah Cook, senior China research analyst at Freedom House, a US independent watchdog focusing on human rights. “The red lines of what is being censored are constantly moving.”

2019 marks the fourth year in a row that Freedom House has ranked China at the bottom for Internet freedom in its annual report “Freedom on the Net”.

A business looking to enter China has to either play by the rules or leave. For example, LinkedIn doesn’t allow Chinese users to access politically sensitive profiles or posts from people outside the country.

Why such restrictions on a tool specifically designed to open up digital realms of information, media and debate?

“That censorship relates to the legitimacy of the Chinese Communist Party and promoting an official narrative about the nation-state,” says Renren Yang, an assistant professor of modern Chinese popular culture at the University of British Columbia.

While Chinese internet users can’t use Google and WhatsApp, they have Chinese equivalents, Baidu and WeChat.

Meanwhile, Amazon shut down its online store in China earlier this year in the face of poor sales trying to compete against Alibaba.

“An isolated Chinese internet is cut off from the rest of the world,” says Ms Cook. “And what is worrying is that other countries are copying what China is doing by blocking access to certain sites or slowing down net service during protests or rallies.”

Prof Yang says it would only benefit China to usher in more Western companies seeking to bring its services to the country. “For example, competition with Chinese local telecom companies will spawn the invention of new technologies and new services that people can afford and utilize. Competition brings forth innovation.”

Other experts are hopeful that a splintering of the Internet won’t be permanent.

Prof Yang says: “One day, I’d like to see the Great Firewall come down, just like the Berlin Wall did.”