How Dan Aykroyd went from battling spirits to selling them 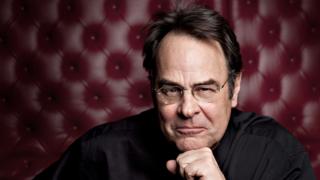 The BBC’s weekly The Boss series profiles different business leaders from around the world. This week we speak to Canadian actor and vodka entrepreneur Dan Aykroyd.

As a much-loved Hollywood star, it is fair to say that a great many movie fans would be relieved to know that Dan Aykroyd didn’t pursue his initial career plan to become a priest.

Instead of following that path of spirituality, he went into stand-up comedy and then acting, for which he is perhaps best-known for battling evil spirits in the 1984 box office smash Ghostbusters.

In more recent years Aykroyd has delved into the business of another kind of spirits – alcoholic drinks – selling both tequila and vodka.

He has run his own vodka company since 2007

As warm and friendly in real life as his public persona suggests, he says that his now more than 45 years as a professional actor made him very well prepared to make the step across to also being an entrepreneur.

“The moment I entered the acting trade I was in ‘show business’,” says the 67-year-old. “I had to market and broker deals for myself.

“Every audition is a sale, then you have to follow it up with a contract, union obligations, tax planning, as well as – if you have a good job as an actor – investment.

“Then, when I was originating my projects, that is selling a piece of material, I had to set a value and broker a deal. So, I’ve been in show business all the way through. It’s not too hard to look at the numbers in another dimension.”

Born in Ottawa, the Canadian capital, in 1952, his dad was a policy advisor to Canadian Prime Minister Pierre Trudeau, the father of the current incumbent Justin. Aykroyd’s mother was a secretary.

He attended Catholic school, hence the initial plan to become a priest, but changed his mind at the age of 17. He then studied criminology and sociology at Carleton University in Ottawa, only to drop out before completing his degree. Instead of studying he started out as a comedian, and helped to run a bar.

His big break came in 1975 when, aged 22, he was appointed to the writing team of a forthcoming new US comedy sketch show called Saturday Night Live. Aykroyd managed to also get himself a starring role, and he was a key feature of the first four series that ran from that year to 1979.

Film work then followed, and in 1980 he had a major hit starring in The Blues Brothers, for which he also co-wrote the screenplay. The movie remains a much-loved comedy classic, and Aykroyd still occasionally tours with the “The Blues Brothers Band”, singing as his character from the film – Elwood Blues.

Ghostbusters arrived four years later, which he again co-wrote, and he was shortlisted for a best supporting actor Oscar for 1989’s Driving Miss Daisy. Other film highlights include Trading Places, Spies Like Us, Antz, and Grosse Pointe Blank.

Aykroyd has also directed one movie – 1991’s Nothing But Trouble – which he says helped hone his management skills. “The first thing [as a director] is that you have to respect what others are doing for you, respect that they have skills and abilities that you may think you know something about, but you don’t, because you don’t do that particular function with an organisation,” he says. “Let them do their job.”

Unfortunately the film was a flop, costing $40m (£31m), but only making $8.5m at the box office. “The studio will kill you if you lose that kind of money,” he says. “Your career’s hit with a sniper’s bullet.”

The original Ghostbusters movie was a global box office success

His first business venture came in 1992 when he co-founded the House of Blues live music venue and restaurant chain. The business is now owned by entertainment giant Live Nation, but Aykroyd remains a paid consultant.

The move into the alcohol industry came in 2005, when Aykroyd set up a company to import Patron tequila into Canada. Two years later he launched his pride and joy – Crystal Head vodka.

Easy to spot thanks to its human skull-shaped glass bottle, Aykroyd says it is a premium product. It is made in the Canadian province of Newfoundland and Labrador from Canadian corn, and he remains the majority owner.

He adds that the bottle design was chosen as a nod to the legend that ancient tribes across the Americas used crystal skulls in religious ceremonies. The vodka has now sold more than 13 million bottles.

“I go around the world talking about the fluid and how proud I am that it’s from Canada, I get to talk up my country,” says Aykroyd.

Holly Wyatt, managing partner of Kinetic Brands, a Canadian company that helps promote spirits, says that Crystal Head has certainly benefited from the fact it is owned by a celebrity.

“When Aykroyd launched it, it was cool because it was him,” she says. “It is also a great package and a great liquid, so people would go back to it. But him still being involved is very evidently a reason why some consumers buy the brand.”

While the vodka business takes up some of his time, he is still busy with acting work. Not that he needs the money – his net wealth is estimated at $135m.

This summer he stars in the latest Ghostbusters movie, the fourth in the series. He says he is pleased to be wrestling with the supernatural kind of spirits again.

In fact, Aykroyd has had a lifelong interest in the supernatural, something he picked up from his father, and a great grandfather who was a mystic.

“You know, my great grandfather Sam Aykroyd, the psychic researcher and dentist from Kingston, Ontario, would be very happy that Ghostbusters has stimulated such fun and laughter, as well as interest in the paranormal.”