How do toy shops pick the right Christmas toys?

December 24, 2019 by Joshua Marshall No Comments 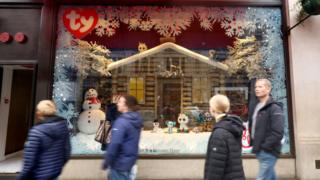 It can be stressful deciding what toy to buy for kids at Christmas.

Imagine, then, deciding what toys to buy to fill the shelves of Hamleys on London’s Regent Street, where more than 650,000 shoppers have already walked through the doors this December.

It is a mammoth task that starts at the beginning of the year, according to Sumeet Yadav, who runs the retail business of Reliance Brands, which owns Hamleys.

He says the stores’ buyers visit toy fairs all over the world to decide what children will want for Christmas, when Hamleys makes about a fifth of its money.

It’s “a bit of science and a bit of luck”, Mr Yadav says, describing their process.

The science is identifying and matching social trends with the toys being made by manufacturers.

This year, a lot of people are trying to spend more time with family in what Mr Yadav describes as a “disconnected world”.

He suggests that explains the popularity of Pictionary Air, a digital twist on the old card game in which players have to illustrate a word or phrase on a card for their team to guess.

“A lot of toys, which were traditional in the past, are now coming back with a technology connect,” he explains.

As for the luck, Mr Yadav says: “Sometimes you go wrong.”

The next challenge is to get those toys into the hands of children.

That starts with elves “creating a ruckus” on Regent Street, home to Hamleys’ flagship store.

The theatre is designed to engage customers from the moment they enter the shop.

Once they are inside, Mr Yadav says, the “magic guy”, “the bubbles person” and “the guy flying the drone or the fighter jet” are all trying to get the customer to touch the toys.

He says that creates an “affinity” with the consumer.

“When you do the magic trick and a three-year-old kid is able to deliver the magic and suddenly he is the hero of the other 50 people that are looking at him, that’s a powerful feeling,” he says.

“The idea is to make an emotional connect, which is what we believe toys are to most parents and kids.”

And it appears to be working for the business.

Mr Yadav says the firm has seen an increase in like-for-like sales since this time last year, bucking a wider trend toward dismal performance on the High Street.

The store has benefited from a surge in sales in the final few days before Christmas, which Mr Yadav will want to continue until the stores close on Christmas Eve.

And he might get his wish. Figures from YouGov suggest that more than 10% of shoppers still buying presents in December would not finish their shopping until Christmas Eve.

Other toy shops, such as The Entertainer, which has about 150 stores across the country, are also hoping for a last-minute rush.

The firm’s founder, Gary Grant, told the BBC that the final three months of the year had been “challenging” for his chain of toy stores.

He says October, November and December are the most important months for the company.

“It’s the quarter in which – as a toy retailer – we actually make money,” he says.

Fortunately, there has been an eleventh-hour boost in sales ahead of the big day.

“December has picked up since Black Friday – and these last few days have been absolutely outstanding,” he says.

The Entertainer is not the only store to see Christmas come late this year.

Diane Wehrle from Springboard, which tracks visits to the High Street, says more and more people are leaving their shopping to the last minute in the hopes of finding a bargain.

In fact, Monday saw a 10% increase in the number of people flocking to retail parks, compared with the final Saturday before Christmas, also known as “Super Saturday”. And 3% more visited high streets and retail parks.

She expects a further surge in store visits on Christmas Eve, as shoppers grow “ever more clever and ever more savvy” by waiting until the last minute to do their Christmas shopping in the hope that retailers will drop prices further in the final hours before the big day.

But she says a rush before shops close on Christmas Eve is unlikely to make up for a Super Saturday that “wasn’t very super”.

That, she says, is because younger people are more conscious of wastefulness when they shop.

The collective change in consciousness is partly due to the influence of environmental campaigners such as Greta Thunberg, Ms Wehrle says.

But she also thinks it is influenced by the number of young people renting in the UK, where more than a third of 23-34 year olds live in rented accommodation.

She says that makes them “transient” and unlikely to want to accumulate stuff to lug between houses when they move.

As a result, she says, there is less of a focus on “token gifts”, as young people put their money into single big-ticket experiences rather than buying “pointless” presents.

“They are buying fewer unnecessary gifts that will just fill stockings,” she says.