How fire shaped humans, and forged the modern economy 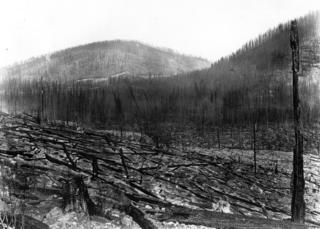 “The canyons seemed to act as chimneys, through which the wind and fires swept with the roar of 1,000 freight trains. The smoke and heat became so intense that it was difficult to breathe. The whole world seemed to us men back in those mountains to be aflame. Many thought that it really was the end of the world.”

US forest ranger Ed Pulaski was caught right in the middle of what would become known as the “Big Blowup” – also known as The Great Fire of 1910. Pulaski realised that his task was no longer to save the forests of northern Idaho, but to protect the firefighters.

“Trees were falling all about us,” he said. “And it was almost impossible to see through the smoky darkness. Had it not been for my familiarity with the mountain trails, we would never have come out alive, for we were completely surrounded by raging, whipping fire.

“My one hope was to reach an old mine tunnel which I knew to be not far from us. We reached the mine just in time.”

Pulaski passed out. Earlier, with the fire approaching, he had told his wife Emma where to take shelter with their 10-year-old daughter Elsie – and warned her he might not return. The next morning, he could not see, and his hands were burned. But he was alive, and so were all but five of his men.

The Big Blowup had killed 86 people, and consumed enough wood to build 800,000 houses.

It also seared the national consciousness and the US Forest Service promised to douse all wildfires as quickly as it could.

In fact that promise would turn out to be unwise, but you can understand the need to make it. Fire is terrifying, but it is also fundamental to the modern economy.

For the first 90% of Earth’s history, there was no fire at all. There were volcanic eruptions – but molten rock is not on fire, because fire is a chemical reaction: the process of combustion.

It is life that creates both the oxygen and the fuel that fires need to burn. Fossil evidence suggests that flammable plant life evolved around 400 million years ago, and periodically went up in smoke, partly because of those volcanoes, but mostly due to lightning.

In recent years, satellite observations have shown us how surprisingly common lightning is – there are around eight million strikes a day. It is still responsible for more wildfires than ill-advised barbecues or carelessly discarded cigarette butts.

Fire shaped landscapes – and, with it, evolution. It enabled the spread of grasslands, somewhere around 30 million years ago. Without fire, they would have reverted to scrub or forest. And grasslands are thought to have played a role in the emergence of the hominids who evolved into us.

Try to imagine the economy before our ancestors tamed fire.

You can start by discarding any products made with metal, or using metal tools – metal starts life in a furnace. The same goes for glass.

Now forget anything that involves burning fossil fuels, for transport or electricity; or that uses materials made in the heat of a fire – think plastics – or plants grown with artificial fertilisers, made with the Haber-Bosch process.

No bricks or pottery: they are fired in a kiln. There is not much left. Raw, organic food, cut up with a sharp stone? We can hardly call it an “economy” at all.

More Things That Made the Modern Economy:

Exactly when and how our ancestors learned to control fire is a matter of some debate.

Chimps appear to understand how wildfire will spread pretty well. And other species are reportedly alert to the hunting opportunities it offers. Some birds of prey have even been seen picking up burning sticks, dropping them to start a new fire, and pouncing on the creatures who then make a run for it.

It seems likely that our ancestors similarly harnessed wildfires for hundreds of thousands of years before they figured out how to make sparks from flint. Perhaps they kept the fires alive by adding slow-burning animal dung.

Meanwhile, archaeologist John Gowlett links fire to the “social brain” hypothesis – the idea that we evolved bigger brains to navigate growing social pressures. Evenings around the fire will have given our ancestors more time to socialise.

However much truth is in those speculations, economic development has seen us confine fire to various special chambers – from industrial plants to internal combustion engines to the gas oven in your kitchen. The historian Stephen Pyne calls this the “pyric transition”.

And where that has not yet happened, it is a problem: in developing countries, millions of deaths are linked to air pollution caused by cooking on indoor fires. But Pyne argues that this transition increased our fear of wildfires. And with climate change we can expect to see more of those fires.

While satellite observations are helping us to understand them, changing patterns of weather and vegetation are making them harder to predict.

It took half a century after Pulaski’s heroics for consensus to form that quickly extinguishing wildfires is not such a great idea.

The problem is that eventually there will be a fire you cannot control – and that fire will be more devastating, because it will burn through all the deadwood that would have been cleared by the small fires if you had not rushed to put them out.

And in the meantime, complacency sets in: we are increasingly building in or close to wilderness areas where fires will break out sooner or later. When experts advise it might be wise to let those fires burn, you can bet that the people who live nearby are not going to be too keen.

As Andrew Scott argues in his book Burning Planet: “Our increasing scientific understanding of fire in recent years has not translated into greater public awareness.”

Some economists think that there is a parallel between handling wildfires and dealing with some entirely man-made crises. The theory is that getting better at handling small problems creates a growing sense of safety, which paradoxically creates the risk of much larger problems.

Take the financial crisis of 2007-2008, the biggest economic “wildfire” of our times.

In his book Foolproof, the Wall Street Journal’s chief financial commentator Greg Ip argues that financial policy-makers had got so good at extinguishing minor crises that people became over-confident, and took silly risks – such as betting the ranch on sub-prime mortgages.

It was precisely the success at mitigating previous risk which led to the subsequent misfortune.

“Our efforts to make life safer come into conflict with an equally irrepressible desire to make things bigger and more complicated,” he writes. “As our cities, transport systems, and financial markets become more interconnected and complex, so have the opportunities for disaster.

“Successfully preventing one type of risk may simply funnel it elsewhere, to re-emerge, like a mutated bacteria, in more virulent fashion.”

And when a financial crisis came along that could not be stamped out, those bad bets fuelled a global conflagration which itself spread like wildfire.