How liquid air could help keep the lights on 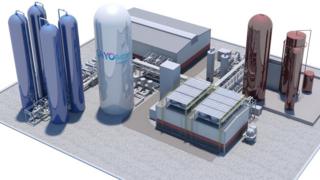 It sounds like magic but it is real – a plan to store cheap night-time wind energy in the form of liquid air.

Here is how: you use the off-peak electricity to compress and cool air in a tank, so it becomes a freezing liquid.

When demand peaks, you warm the liquid back into a gas, and as that expands it drives a turbine to create more electricity.

The technology, created by a backyard inventor, is about to hit the big time.

It has been tried at small scale but now the firm behind it, Highview, has announced that a grid-scale 50MW plant will be built in the north of England on the site of a former conventional power plant.

The technology has been supported by the UK government. One attractive feature is that it uses existing simple technology developed for storing and compressing liquefied natural gas (LNG), so unlike battery storage it does not require mining for rare minerals.

The key innovation is to store the excess heat given out when the air is compressed and use it to re-heat the liquified air when it is needed.

The idea was promoted by self-taught engineer Peter Dearman from his garage in Bishop’s Stortford, Hertfordshire.

He had been developing a car run on similar principles with liquid hydrogen and saw the potential for applying the technology to electricity storage.

He is now a passive shareholder in Highview, which is hoping to play in the big league of storage.

He told BBC News: “It’s great news – very exciting. There’s such a lot of potential in these technologies.”

The proposed grid-scale project will supply electricity to around 25,000 homes for a day, although realistically it will only be used for short periods to cover sudden peaks in demand.

The firm’s boss, Javier Cavada, said the plant will be built on the site of a former disused power plant.

He said: “This plant will provide the critical services needed to help maintain a stable and reliable grid. Giga-scale energy storage will be key to a 100% carbon-free future.”

The Electricity System Operator, which manages supply and demand in Britain, said they expected the Highview plant to bid for contracts in the market for flexible electricity.