How much do the British spend on a night out? 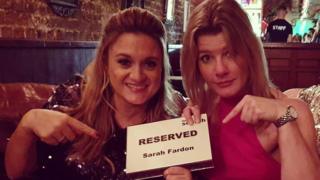 A big night out in London once cost Sarah Fardon a whopping £250.

Sarah isn’t the only one splashing the cash on nights out in towns and cities across the UK. Consumers now spend an average of £69.64 on a night out, a survey suggests.

The figure is based on a survey of 2,335 people conducted by night club and bar operator The Deltic Group.

It takes into account every component of a night out, including drinks at home, transport to the venue, food and drinks while out, entry fees and transport home.

In essence, this is the night-time economy, which is of growing economic importance in the UK.

Nationally, the night-time economy is the UK’s fifth biggest industry, with annual revenues of £66bn, according to The Night Time Industries Association.

London even has a dedicated night czar in Amy Lamé, who is responsible for the city between 18:00 and 06:00.

On average, people are spending £2.59 more when they go out at night than they were this time last year, according to the quarterly survey.

Deltic said the rise could be attributed to people spending more on every aspect of their night, except drinks while out, which are roughly the same price as they were last year.

Sarah, who works as a global communications executive for technology consultancy firm Capco, pointed out that she could have gone on holiday with the money she spent on her most expensive night out.

“Sadly, I think I’m a millionaire on a night out,” said Sarah. “Contactless just makes things dangerous. It’s too easy to spend money.”

Prices for a night out vary wildly across the country, with London being the most expensive city by some distance.

People aged 26-30 are the biggest spenders in the country, with the average night out costing this age group £75.24.

Bucking that trend is Alan, a 51-year-old management consultant. He says he spends between £150 and £200 on a night out with his wife. That said, the figure falls to £50-£80 when he’s out with friends.

Asked why nights out are more expensive with his wife, Alan said: “We go to more expensive places, I’m paying for both of us and it will often include taxis if we are drinking.” He added that they “tend to get a decent wine as well, which adds to the bill”.

Elsewhere, the survey suggested that more than a quarter of 18 to 21-year-olds go out two to three times a week, compared with 15% of all consumers.

Beating the cinema and nightclubs, the pub appears to be where people spend most of their money on nights out, with 25.6% of people saying they spend more money in pubs each month than they do on other forms of late-night entertainment.

Given the time of year, people are also willing to spend more on their night out, according to the survey.

According to the survey, 48% of respondents said they tended to spend more on nights out during the festive period than they normally would.

Peter Marks, chief executive of Deltic, said: “We know that consumers celebrate occasions by going on a night out, and what bigger occasions are there than Christmas and New Year?

“We’re seeing this trend reflected in this quarter’s figures. More than 50% of Brits believe that a big night out is a good way to celebrate the end of the year and as the figures show, we certainly will be celebrating.

“More than 40% of us will enjoy more frequent nights out to catch up with friends and almost half of us will spend more while we’re out.”