How much should bosses be paid? 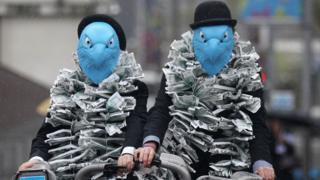 “The average chief executive of a major American corporation – according to a recent Senate hearing – is paid about 100 times as much as the average worker. And our government today rewards that excess with a tax break for executive pay, no matter how high it is. That’s wrong.”

That was Bill Clinton, during the 1991 US Presidential campaign. He won. And he promptly made good on his promise to tackle excessive pay.

Usually, salaries are treated as costs, reducing the profit on which a company pays tax. President Clinton changed the law. Companies could still pay as much as they wanted to – but salaries over $1m (£770,000) would no longer be tax-deductible.

It had a big impact. By the time Clinton left office, in 2000, the ratio of chief executive pay to worker pay was no longer 100-to-one. It was well over 300-to-one.

What had gone wrong? We can approach that question from the olive groves of ancient Greece.

The philosopher Thales of Miletus, so the story goes, was being challenged to prove the value of philosophy. If it was so useful, why was Thales so poor?

Aristotle, who tells this tale, makes clear that the question is gauche.

Of course philosophers are smart enough to get rich, but they’re also wise enough not to bother. We can imagine Thales heaving a sigh: “Okay, I’ll make a fortune – if I must.”

Back then, philosophy included reading the future in the stars.

Thales foresaw a bumper harvest of olives, which would mean high demand to rent time on the town’s olive presses. Thales visited each press owner with a proposition. Aristotle is hazy on the details, but mentions the word “deposit”.

Perhaps Thales negotiated the right to use the press at harvest time, but if he decided against using it, the owner would simply keep his deposit.

If so, it’s the first recorded example of what we now call the option. A poor olive harvest, and Thales’ option would be worthless.

But, whether by luck or astronomical judgement, he was right. Aristotle tells us that Thales hired out the presses “on what terms he pleased, and collected a good deal of money”.

Nowadays, many options are bought and sold on the financial markets.

The option is higher-risk and higher-reward. If the share price is lower than my option to buy, I’ve lost everything. If it’s higher, I can exercise the option, resell the shares, and make a bigger profit.

But there’s another use for stock options – an attempt to solve what economists call the principal-agent problem. A “principal” owns something; they employ an “agent” to manage it for them.

Imagine that I’m made boss of Apple, and you own Apple shares. That makes you the principal, or one of them. I’m the agent, managing the company for you and the other shareholders.

You’d like to trust me to work hard in your interests, but you can’t see what I’m doing all day. Maybe I make every decision by consulting an astrologer – not a smart one like Thales, either – but I always spin some plausible excuse for why profits are stagnating.

But what if I’m given options to buy new Apple stock in a few years? Now I stand to gain from making the share price rise. Sure, if I exercise my option, that slightly dilutes the worth of your shares – but if their price has been rising, you shouldn’t mind.

It all sounds perfectly sensible, and in 1990 the economists Kevin J. Murphy and Michael Jensen published an influential paper on the topic.

“In most publicly held companies,” they wrote, “the compensation of top executives is virtually independent of performance.”

A rising stock market meant even a horoscope-consulting chief executive would have been quids in. The gap between bosses’ and workers’ pay ballooned. A Clinton-era congressman says the law “deserves pride of place in the Museum of Unintended Consequences”.

But hold on – if options incentivise executives to do a better job, surely that’s no bad thing? Unfortunately, that turned out to be a big “if”.

What options really incentivise, is maximising a company’s share price on a given date. If you think that’s exactly the same thing as running a company well, I have some shares in Enron to sell you.

If stock options aren’t the best way to reward performance, shouldn’t company boards of directors be keen to find alternatives?

In theory, yes – it’s the board’s job to negotiate with corporate bosses on behalf of shareholders. In practice, this is another principal-agent problem, as bosses can often influence who directors are and how much they’re paid. There’s obvious potential for mutual back-scratching.

In their book Pay Without Performance, Lucian Bebchuk and Jesse Fried argue that directors don’t actually care about linking pay to performance, but must “camouflage” this indifference from shareholders. The best form of compensation for fat cats is “stealth compensation”, and stock options seem to be a way to achieve that.

Perhaps shareholders need yet another agent to supervise how directors reward bosses.

There is one candidate: many people hold shares not directly, but through pension funds, and there’s some evidence that these so-called “institutional” investors can persuade boards to be tougher negotiators.

When a large shareholder can assert some control, there’s a more genuine link between executive pay and executive performance. However, this link seems all too rare.

Executive pay is often in the headlines, even in countries where the gap to worker pay is less than in America. Given this, there’s surprisingly little evidence on what makes sense.

How well can you evaluate the job a boss is doing? Opinions differ.

Were bosses in the 1960s really less motivated because they earned a mere 20 times workers’ pay? It seems most unlikely.

On the other hand, good decisions at the helm of a large company are worth a lot more than bad ones. So, maybe those executives really are worth eight-figure compensation packages. Maybe.

But if so, that isn’t clear to voters or workers, many of whom still feel the anger that President Clinton once voiced. Perhaps chief executives should learn from Thales, who was clever enough to make more money, but wise enough to wonder if he should.