How much! Why are service station snacks so expensive? 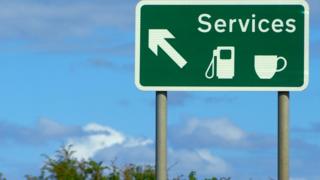 An urgent need to go to the loo prompts most visits to a motorway service station, rather than any particular desire to stop and shop.

But the price drivers and their families pay if they then choose to stock up on snacks has been laid bare by mystery shoppers.

A bottle of water costs four times more than in a supermarket, the snapshot of prices by insurer Admiral suggests.

No wonder value for money at services scored poorly in a recent driver poll.

Only 59% of visitors rated food and drink as good value for money, compared with a general satisfaction rate of the service station experience in England of 90%, according to lobby group Transport Focus.

Operators point out that these sites can be expensive to run, and visitors can park and use the facilities for free, without any obligation to buy anything.

Yet, many drivers complain that they have little choice but to pay high prices, as service stations are generally the only option on the country’s motorways.

The mystery shop by Admiral researchers is only a snapshot of 21 of the UK’s service stations during October, out of more than 100 in the UK. Prices can change and promotions can easily bring down prices.

Families will be planning motorway trips to visit relatives this Christmas, and may be more conscious of prices at this already-expensive time of the year.

So they may choose to fill water bottles for free, rather than pay up to £2.29 for a 500ml bottle of water, as was found by the mystery shoppers at Beaconsfield Services on the M40. The operator, Extra Motorway Services, has not responded to a request for comment.

Across all 21 service stations the average price for water was £1.32 more expensive than a 44p bottle that could be found in a supermarket – so four times the cost.

Clare Egan, head of motor product at Admiral, said: “We all expect to pay a little more for convenience, [but] grabbing the essentials from home or at least a supermarket before setting off could result in some big savings on the overall cost of your journey.

“Given the availability of free water refills at all of the service stations and the push to be plastic-free, motorists don’t need to spend anything on bottled water.”

The full basket of drinks and snacks price-tested by researchers also included a cheese sandwich, a cold sausage roll, a packet of ready salted crisps, a packet of wine gums, a bar of chocolate, and a bottle of Coke.

Roadchef’s Durham services on the A1(M) came out most expensive of the 21 tested. The total cost was nearly £10 more expensive than a supermarket best price, researchers said.

A spokesman for Roadchef said that, unlike the vast majority of its outlets, Durham had to buy in sandwiches rather than making them on site. He said most other items were uniformly priced across sites, competitive against others, and there was a range of choices for customers.

“Like all our sites Durham resembles a mini high street, and offers premium and value options depending on our customers’ preferences,” he said.

He added that there were greater overheads in running service stations, which were required to be open for 24 hours every day, unlike many town and city centre retailers. They also faced costs to maintain land and, at times, water treatment works.

The mystery shop also revealed big differences between service stations on the cost of petrol, with unleaded prices varying by 20p a litre.

The tired motorist might also be surprised to discover that the price of a regular latte varied by £2 depending on which service station they stopped at. Such price differentials for the nation’s favourite bought hot drink can also be found on the High Street, so it is an issue not only found on the motorway.

In July, Transport Focus published the results of its customer survey covering all of England’s service stations. It found a generally high level of satisfaction, with Roadchef’s Norton Canes services on the M6 toll coming out on top. Yet, it too raised the issue of prices.

“Motorway users tell us they have a good experience when visiting service areas, but it’s clear that many do not feel the experience is good value for money,” said Transport Focus chief executive Anthony Smith.