How protests pushed Hong Kong to the recession brink 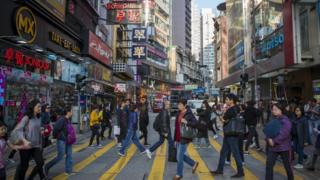 Tourists are staying away and retailers are reeling after nearly five months of protests that have dealt a “devastating” blow to businesses in Hong Kong, and pushed the economy to the brink.

Preliminary growth figures due out Thursday are expected to show Hong Kong has entered a technical recession, defined as two consecutive quarters of negative growth.

Ahead of the numbers, the city’s leader Carrie Lam warned of a looming recession. She expects the economy to record negative growth for the year.

“We don’t think it will rebound that fast,” Mr Tse says.

The protests – which began over a proposed extradition bill between the territory and mainland China – have piled pressure on existing economic strains.

Hong Kong has been grappling with the US-China trade war, while a weaker yuan has hit spending from mainland visitors and bruised consumer sentiment.

The controversial extradition bill has been withdrawn, but demonstrations continued and evolved into demands for greater freedoms, and an independent inquiry into alleged police brutality.

Those dramatic scenes have kept tourists away.

In August, arrivals to the city – a popular travel destination and transit hub – hit their worst level since the SARS crisis of 2003. Visitor numbers are expected to plunge nearly 50% in October compared to the previous year.

Many hotels are struggling to fill their rooms and Mr Tse says the vacancy rate is sitting around 60%.

Some hotels have slashed prices in the hopes of winning back tourists, while reports suggest many have forced staff to cut work hours or take leave to cope with the slowdown.

Among those to have taken a hit is Ovolo Group. The firm, which operates four hotels in Hong Kong, has seen occupancy rates fall by up to 30% over the past three months.

“It’s devastating to see the effect that the recent situation in our city has had on local businesses, particularly those of us in the hospitality industry,” Ovolo Group’s chief executive Girish Jhunjhnuwala says.

Mr Jhunjhnuwala says business is holding up better on weekdays as most guests choose to leave before the weekend, when protests typically kick off. The firm has introduced flexible cancellation policies to help offset uncertainty for guests.

With fewer tourists flying in, airlines have also been knocked. Days of protests at Hong Kong’s airport in August, one of the world’s busiest transit hubs, led to widespread flight cancelations.

Hong Kong’s flagship carrier Cathay Pacific has seen a sharp drop in passenger numbers to the territory in the past two months, while Qantas said the protests would hit first-half earnings by A$25m ($17m; £13m).

Lighter tourist flows have weighed on retailers in the city, many already battling with softening consumer sentiment from local shoppers.

Some shops have been forced to shorten trading hours while workers report fears over their safety as protests have turned violent.

Vandals have targeted big mainland firms like Bank of China and tech company Xiaomi. Stations along Hong Kong’s MTR metro system have also repeatedly been attacked, vandalised or even set on fire.

The chaos has led to a sharp fall in retail sales, down 23% in August, the biggest drop on record. The decline in September is expected to be even worse.

Additionally, the long-running unrest has shaken business confidence and frustrated investment. That could have a more lasting impact on the economy, Mr Tse says, as questions and uncertainty remain over Hong Kong’s future as a financial hub.

The city has so far injected more than HK$20bn to combat the slowdown including help for the transport, tourism and retail sectors. More relief measures are expected.

But the government argues there’s only so much it can do to stem the economic slide.

“To truly cure the problem, we must always work together to stop the violence, stop the destruction of traffic infrastructure and specific target shops, banks and institutions… and let the society recover as soon as possible,” Hong Kong’s Financial Secretary Paul Chan said in a blog post.

“Our society and the economy need to take a breather and need to get back on the road.”