How the McDonald’s model revolutionised business 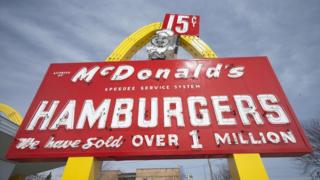 The way Ray Kroc tells the story, when he first encouraged the McDonald brothers to open more hamburger restaurants, they winced.

The year was 1954. The place: San Bernardino, California, then a quiet town on the edge of the desert, some 50 miles east of Los Angeles.

Kroc sold milkshake machines and Richard and Maurice (Mac) McDonald were among his best customers.

Their restaurant was small, but sold lots of milkshakes. Clearly, they were doing something right.

But they did not want to do more of it, and Mac explained why: “We sit out on the porch in the evenings and watch the sunset. It’s peaceful.”

Opening more branches would be a headache – travelling around, finding locations, vetting managers, staying in motels. Why bother? They were already making more money than they could spend.

This made no sense to Kroc. “His approach was utterly foreign to my thinking,” he later recalled.

So he convinced the brothers to let him expand their restaurant chain. By the time Kroc died, three decades later, McDonald’s had thousands of restaurants bringing in billions of dollars.

Which goes to show that successful entrepreneurs are not all the same. They have different talents, and want different things.

Take Dick and Mac. They were brilliant at figuring out more efficient ways to make hamburgers.

As John F Love notes in his book McDonald’s: Behind the Arches, the brothers worked with a local craftsman to invent a new kind of spatula, a new dispenser that squirted the same amount of ketchup and mustard every time, and a rotating platform to speed up the process of assembling of burger, bun and condiments.

What Henry Ford had done for cars, the McDonald brothers did for hamburgers and French fries: they broke down processes into simple, repetitive tasks.

This meant they could churn out food quickly, cheaply and consistently. There was nothing else like it.

But when it came to the wider world, the brothers seem to have been fairly clueless.

When competitors started peering through the windows, taking out notepads and sketching plans, Dick and Mac laughed about it. When anyone asked about those ingenious condiment dispensers, they cheerfully named their craftsman friend. None of them had bothered to patent the design.

Some people wanted more than snatched sketches, so the brothers sold franchises – after a fashion.

For a one-off fee, you could buy blueprints to their building, with the golden arches, a 15-page description of their “Speedee Service System”, and a week’s training. After that, the franchisees were on their own.

Dick and Mac did not expect that their trainees would serve the same menu, or even use the same name. When their very first franchisee mentioned that he would also call his new restaurant “McDonald’s”, Dick replied: “What the hell for?”

Into this smooth-running kitchen and half-baked franchising operation walked a man with different skills and desires.

Ray Kroc was in his 50s, and managing health problems from diabetes to arthritis.

But he was keener on money than peaceful sunsets, and he loved life on the road.

Kroc later wrote that “finding locations for McDonald’s is the most creatively fulfilling thing I can imagine”.

Where the brothers had rethought French fries, Kroc would rethink the franchise concept.

The idea itself was not new. The word “franchise” comes from the old French “franche”, meaning “free” or “exempt”.

In ages past, a monarch might have granted you a franchise which would have given you the exclusive right to do a certain thing – to sell armour, or run a cattle market – in a defined area for a set time.

In the 19th Century, for instance, you might have bought the exclusive right to sell Singer sewing machines in your local area.

Nowadays franchise operations are everywhere. Stay in a Hilton or Marriott hotel, rent a car from Hertz or Europcar, or shop at a 7-Eleven or Carrefour grocery store, and you are likely to be dealing with a franchise owner.

The idea of the business format franchise seems to have started in the 1890s with Canadian Martha Matilda Harper.

She built an international network of beauty salons. A former servant, her franchises transformed the lives of many other servant girls.

But it was 1950s fast food that gave the franchise its modern form, with not only McDonald’s but Burger King, Kentucky Fried Chicken and many now-forgotten brands.

Kroc’s big insight was the importance of conformity.

You were not just selling the right to use the company’s name and learn its methods – you were imposing an obligation to do things in a certain way.

McDonald’s opened a full-time training centre, “Hamburger University”, which drilled students in subjects such as which kind of potatoes to buy.

Inspectors wrote 27-page reports on whether franchisees cooked food at the right temperatures and kept the bathrooms clean.

At first glance, the appeal to the budding restaurateur is not obvious.

Wouldn’t you want to design your own branding and develop your own menu? Why pay the McDonald’s corporation $45,000 (£34,000) plus 4% of gross sales, just so it can send an inspector to watch you scrub your own toilets?

Well, much of what you are paying for is the benefit of the brand – and if you are being monitored to make sure you do not cut corners that damage the brand, you can feel reassured that your fellow franchisees are too.

As for the franchisor, why not own and operate new branches yourself? Many companies do both – McDonald’s owns about 15% of its 36,000-odd outlets.

But franchisees bring a lot to the company, like hard cash: a McDonald’s restaurant can cost more than $1m (£768,000) to launch.

Franchisees also provide local knowledge, especially important if you are expanding into a new country with an unfamiliar culture.

And there is motivation: an owner-manager with their own money at stake might put more effort into keeping costs down than a manager on a corporate salary.

The economist Alan Krueger found evidence that may support this idea: workers and shift supervisors apparently earn more in company-owned fast food outlets than franchised ones.

When both sides worry about the other side shirking, it’s known as “double-sided moral hazard”. A branch of economics called agency theory tries to understand how franchise contracts solve this problem through their mix of upfront fees and percentage payments.

But it seems to work, perhaps because – like Kroc and the McDonald brothers – different entrepreneurs want different things.

Some people want the freedom to run their own business, day-to-day, but are not interested in developing products or building a brand.

One of the McDonald brothers’ early franchisees decided he did not much like their golden arches, so he got his builders to make them pointy and named his restaurant “Peaks” instead.

Those were freewheeling times. These days, the division of entrepreneurial labour is more likely to be as regimented as a carousel full of hamburgers.