How to save the UK’s crisis-hit High Streets 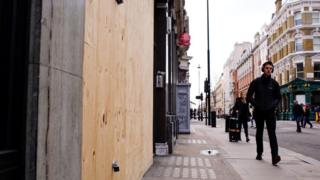 Our High Streets are in crisis. According to the Centre for Retail Research there are around 50,000 fewer shops on our High Streets than just over a decade ago, and some analysts predict it will only get worse.

It’s part of a trend that has seen big names struggling and going bust – including Thomas Cook, Mothercare, Bonmarche and Jamie’s Italian amongst many others

It’s not just shops and shoppers who are affected. High Streets have traditionally been at the heart of communities, but as shops close, it can make whole areas unwelcoming.

Many of us have got fed up with all the hassle of going into town, so we let our fingers do the walking. Online is doing better and better and you can see why; one-click shopping makes buying stuff so painless. But internet shopping still only accounts for around 20% of the total. That can’t be the whole reason for the High Street’s decline.

Professor Cathy Parker is co-chair of the Institute of Place Management (IPM) and helps lead the High Streets Task Force, set up by the government last year to support the transformation of town centres. She is an expert in the development of retail – and in her view, it’s been integral to town centres, but they are about much more than shopping.

“Retail has only ever been a part of the functions of a town and city. In the 1980s and 90s, we got a little bit fixated on retail and we just thought that the whole town and the whole city was all about retail.”

As we became more fixated, so High Streets started to lose their individuality. Many once-distinctive town centres became home to the same old set of stores owned by a limited number of powerful chains.

And as every street came to look the same – so they lost much of their appeal. On top of that we deserted them in favour of the more convenient visit to the out-of-town shopping centres. The number of people visiting the High Street has dropped by 20.5% over the past decade, according to figures from retail analyst company Springboard.

To survive and thrive, High Streets need to adapt. But before they do, according to Prof Parker, “places need to understand their function and the things that draw people in to the town centres”.

To reinvigorate them, we need what you might call a Mars bar approach; building town centres which aren’t just about buying stuff, but places you can “work, rest and play”.

In Westcliff-on-Sea, Southend, department store Havens has suffered the fate of many similar bricks and mortar shops.

Once a destination store visited by generations of families, the business has always tried to keep up with changing shopping habits. But they saw the writing was on the wall for the shop itself when online sales started to overtake those in store.

The Havens family who ran the shop for generations, took the brave step of taking their business purely online. That could have left the large listed building empty and neglected.

But now an enterprising boss of a local charity has taken over two floors of the building, in the hope of reimagining the store and the local High Street. Age Concern Southend chief executive Lin Boulter’s idea is giving the building a new lease of life, with a very different purpose.

She showed us around the building as it was being transformed. “We’ve got our podiatrist here, public health are doing flu jabs and smoking cessation. We’ve got a kitchen that is going to be serving the cafe. And we’ve been working with a local day care provider for up to 15 people a day,” she says.

Lin Boulter has converted the store into a hub of local services for the elderly, and which now bounces to the sound of belly dancing classes and the quieter hum of various providers – including hairdressers and social services.

Age Concern Southend leases the building from the shop’s owners, and in turn charges rent from the services that are moving in. It’s early days but Lin Boulter hopes to bring people back onto the High Street and provide footfall for other shops in the area. The Havens store now runs its online business on the top floor.

The owner Nigel Havens is pragmatic – pleased the building could be saved for a new purpose: “The High Street’s important but it needs to change. The thinking is still very much in the past. High Streets everywhere were built for an era 50, 60, 70, 80 years ago.

Unfortunately the thinking is still in that era, and what we need to do is to get reasons for the public to come back into the High Street. It won’t principally be driven by shopping.”

It’s not just individuals who are making a difference, councils have also got increasingly involved.

Stockton-on-Tees High Street faces challenges typical of those in many towns around the country. In the last five years, the town centre has lost more than a hundred stores, according to the Local Data Company. M&S shut up shop last year and Debenhams is due to close this week.

The town has earned a reputation for being proactive in its approach, and is re-thinking its centre, how it should look and what it should offer, and is consulting the local community about this. It is also investing heavily in regenerating the area.

Richard McGuckin is Stockton-on-Tees council’s economic growth and development director. He has been one of the leaders of a move to change the whole profile of their High Street.

“We’ve created what we describe as a large outdoor room so that we’ve got places for performers and our large sporting events that we have right throughout the year here.”

The council is renovating the Globe, an Art Deco theatre – with the aim of generating footfall and a financial boost for the local economy of £18m a year. An expansion of an original smaller scheme, and structural problems with the building work have pushed the budget up to £26.7m. The council’s share of that has risen from an initial £1.15m to more than £22m – £18.65m of that being borrowed.

The council has also bought up key sites – including a large old shopping centre and is considering how to redevelop the area in consultation with the local community. It’s on the shortlist of 100 towns bidding for money from the government’s Future High Streets Fund to help realise these plans.

The council says although these acquisitions will make money, the main motivation is to regenerate the town centre.

Stockton is not alone. Councils across the country have spent £775m on buying up shopping centres in the last three years – one in five of those that have changed hands – according to research by retail property organisation Revo and real estate consultancy Lambert Smith Hampton. Some worry about the risk to taxpayers of councils borrowing money to purchase property.

But David Renard, chair of the Local Government Association’s board of economy, environment, housing and transport, says in the right circumstances it’s the right approach.

“I think each location needs to make their own choices and decisions on that. Some authorities clearly have. They feel that’s the right thing, to be able to have ownership,” he says.

“There’s no doubt that if you own something, it is far easier to regenerate it and do what you want to. So, I think it’s a case of horses for courses.”

It’s certainly true that ownership does give the councils a much bigger say in what the future of our High Streets will look like.

Whoever owns the sites – it is clear that our needs are changing. If the UK’s High Streets are to survive, they need to change as well.

We might moan about the decline of the High Street, but it’s happening in part because we choose not to shop there.

To tempt us back and rejuvenate the High Street and its shops, planners and retailers will have to work together to build a much more enticing offer to get us off our computer screens and bring us back from out of town shopping centres.

Business reporter Adam Shaw presents Panorama: How to Save the High Street on BBC One at 8.30pm tonight