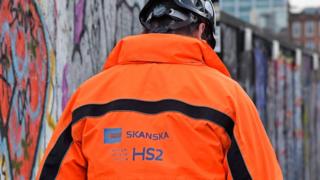 There is “overwhelming evidence” that the costs of HS2 are “out of control” and its benefits overstated, the deputy chair of its review panel has said.

He has published a “dissenting report” on the project, but the government said it represented his personal view.

Trains are due to start running on HS2 between London and Birmingham in 2029.

However, Lord Berkeley says there is little prospect of that before 2031, and warns high speed trains will not reach Manchester and Leeds until 2040.

Lord Berkeley was the deputy chairman of the independent Oakervee Review in to HS2, set up by the government.

However, he has withdrawn his backing from the review, which is expected to be published in the coming months.

He says he disagrees with a draft version of its official report and as a result has published his own version.

He said he and other members of the panel were prevented from contributing to the final draft of the government-commissioned report because the review was “effectively terminated” on 31 October.

He also said the official report has been “unduly influenced” by HS2 promoters and said both HS2 Ltd and the Department of Transport failed to co-operate with the review properly to substantiate their claims about the cost and benefits.

HS2 Ltd denies this claim, saying it provided “full co-operation” with the review.

His report concludes that ministers will either have to accept the higher cost of the line or only build part of the proposed high-speed rail network.

This option, which would save the government £50bn, would also involve upgrading existing Network Rail lines in the Midlands and the north of England, he said.

“The aim must be to give these areas the same standard of commuting service as the south east, whilst, at the same time, improving the existing lines from London northwards,” he said.

Lord Berkeley said that under current plans, HS2 might not reach cities such as Leeds and Manchester for 20 years.

HS2 Ltd, the company responsible for building the new line, says the economic case is strong and it is determined to deliver a railway that is good value for money.

A spokesman said the high-speed line is “critical” for the UK’s future low-carbon transport network, will increase rail capacity and is “integral” to improving the rail network in the Midlands and north of England.

The government says it commissioned the official review from from chairman Douglas Oakervee to provide advice on whether and how to proceed with HS2, while Lord Berkeley’s report is his own view.

Members of the review panel told the BBC in November that a draft version of the report recommends that HS2 should be built with only minor alterations.

They include reducing the planned number of trains per hour from 18 to 14, in line with other high-speed networks around the world.

According to the Times, the draft report also says that “large ticket price rises” would be needed if HS2 does not go ahead, to prevent excessive demand for travel at peak times.