‘HS2 has completely wrecked our lives’ 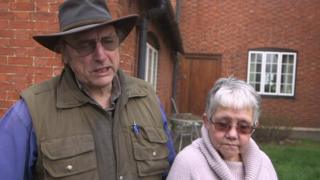 The HS2 high-speed rail route received government approval on Tuesday, but while it has its supporters, not everyone will benefit from it.

Ron and Anne Ryall have been ordered to leave their home next month as the route is due to run right through it.

Ron told the BBC: “I’m finding it difficult that someone can just walk into your life and destroy it. My family has lived in this lane for 100 years. I was born here.”

Anne told BBC Breakfast: “It’s awful, absolutely awful. We feel like a fruit being squeezed out of its skin, closing in and closing in and it’s just a horrible feeling.”

The Ryalls say the money they have been offered to leave is not enough and they will refuse to move from their house in Colne Valley in Buckinghamshire.

However, the chief executive of a Birmingham company feels HS2 will be a huge benefit to businesses in the Midlands.

Simon Topman, of Acme Whistles, said: “Getting to London or going up north from Birmingham – we’re right in the middle of the country – ought to be easy, and it isn’t.

“The capacity just isn’t there, if you go early in the morning you stand, and if you even go off peak, you stand.

“Those affected won’t like it, but the overall benefit to the economy will be great, and I think the environmental impact will be far smaller than anybody imagines.”

Cate Walter, a director of Rhino Safety based near Crewe, told the BBC: “For Crewe this is absolutely crucial. We’re a town been surrounded by a lot of regeneration areas in recent years, but have not been the focus of the regeneration ourselves.

“People have this idea of Cheshire as this leafy affluent sort of area but there are pockets within that, including Crewe, of really quite stagnant economies.

“The investment in our very local economy that HS2 should bring will be absolutely crucial for growing businesses in our area.”