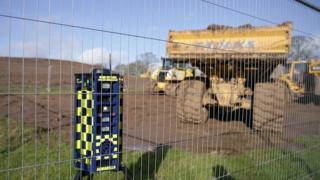 Boris Johnson has suggested the only answer to the “hole” enveloping HS2 is “to keep digging”.

In an interview for Sky Kids’ FYI show, the PM criticised the “profligate” rail project and its “hopeless” management.

But he appeared to rule out pulling the plug on the controversial scheme, which might cost in excess of £100bn, saying “in a hole the size of HS2, the only thing to do is keep digging”.

A final decision on the UK’s largest construction project is due next month.

HS2 is designed to link London, Birmingham, Manchester and Leeds, cutting overcrowding on the railways and helping to rebalance the UK’s economy.

But the project has faced criticism from both Conservative and Labour MPs for being over budget and behind schedule.

An official review of the project, seen by the BBC, warns the project could now cost up to double the official 2015 estimate of £56bn while there is a “considerable risk” its first phase between London and Birmingham might need more money.

But the government commissioned report, led by Doug Oakervee, “strongly advises” against cancelling the project and says that only building one section of the line “doesn’t make sense”.

Quizzed about the fate of the project, Mr Johnson hit out at HS2 Ltd, the company set up in 2009 to oversee it.

“The truth is, the people who did it spent far too much money, they were profligate with the way they did it,” he told the children’s current affairs programme, in a recording to be broadcast on Saturday,

“They just wasted money. And the whole way it was managed was hopeless.”

Asked what he would do next, he replied: “So we’re in a hole, we’re in a mess. But we’ve got to get out of it. And we need a way forward, so we’re thinking about how to sort it out now.

Phase 1 of HS2 between London and Birmingham is due to open at the end of 2026, with the second phase to Leeds and Manchester scheduled for completion by 2032-33. It is designed to carry trains capable of travelling at 250mph (402km/h).

The project has already cost £9bn. On Wednesday, the chancellor Sajid Javid threw his support behind the link, despite the spiralling costs.