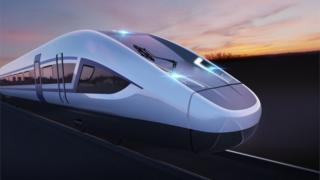 Opponents of the HS2 high-speed railway linking London and the north of England say the government’s review of the project is set to be a whitewash.

The deputy chair of the HS2 review panel, Labour peer Lord Berkeley, says he has been given no opportunity to influence the final report.

He is a vocal critic of the project.

The government says it has been clear no panel member would have a veto, and that it would be inappropriate to pre-empt the recommendations of the review.

‘Locked in a vault’?

Lord Berkeley also speculated that publication of the review has been put on hold until after the general election and the appointment of a secretary of state for transport.

In a tweet, he said: “My role as dep chair of the Oakervee Report on HS2 finished yesterday. Report not finished and no opportunity to influence conclusions.

“We are told that, when completed by Doug O [Oakervee] and the DfT secretariat, it will be locked into the DfT vaults for the new S of S [secretary of state] to publish.”

A spokesman for the Department for Transport would not confirm when the report would be published, telling BBC News the “Oakervee review will conclude in the autumn”.

Lord Berkeley, a civil engineer who worked on the construction of the Channel Tunnel, was a surprise appointment when Transport Secretary Grant Shapps launched the review back in August.

This summer it emerged that the scheme was well over budget and behind schedule.

The government has previously argued that its appointment of a well-known critic of HS2 as deputy chair of the review panel showed it was a genuine exercise and that it was considering all options.

Those options included even scrapping the project, which will cost the taxpayer at least £88bn.

But in recent weeks sources involved with, or close to, the review have told me Lord Berkeley was, in private, very unhappy about the way the process was being handled.

Now he has gone public.

In his tweet, Lord Berkeley said his role on the review had finished without him being given any opportunity to contribute to the final conclusions.

Opponents of the scheme claim the review, which probably won’t be published now until after the election, will be “a whitewash”.

They have long questioned the independence of the man leading the review, Douglas Oakervee – given that he himself is a former Chairman of HS2, the public company running the project.

In September, Transport Minister Grant Shapps said the first phase of the HS2 high-speed railway between London and Birmingham would be delayed by up to five years.

HS2’s total cost has also risen from £62bn, and the second phase has also been delayed.

In August, the government said it planned to review the costs and benefits of the rail project, with a “go or no-go” decision by the end of the year.

The government has said that construction work will continue while the review is ongoing.

Concerns that rising costs and delays could threaten the viability of HS2 are not new. Documents seen by the BBC in the autumn showed that both the government and HS2 knew the high speed railway was over budget and probably behind schedule years ago.

HS2 is a new railway line which, once completed, would run from London to the West Midlands, Manchester and Leeds.

Trains on the London to Birmingham route would be 400m-long (1,300ft) with up to 1,100 seats and would be capable of reaching speeds of up to 250mph. They would run as many as 14 times per hour in each direction.

The Department for Transport says the project will cut Birmingham to London journey times from one hour 21 minutes to 52 minutes.

This would effectively reduce journey times between London and Edinburgh and London and Glasgow by an hour, to three-and-a-half hours.

The government hopes its creation will free up capacity on overcrowded commuter routes.