HS2: Six reasons why the rail route is so expensive 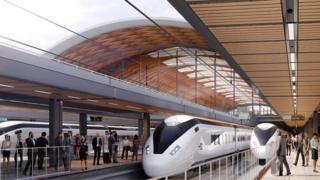 HS2 is set to be the “biggest infrastructure decision since World War Two”, according to one government official.

Whether to go ahead with building the high-speed rail line has become a dilemma for Boris Johnson because the estimated price tag shot up back in the summer.

The government’s official review of the scheme, which has been seen by the BBC, puts the potential cost at as much as £106bn.

Here are some of the reasons why the project is so expensive and why its budget has risen so much.

The blueprint for HS2 has been designed so the railway can accommodate more trains per hour – 18 – than any other high-speed line in the world.

The infrastructure – numbers of platforms at stations – and the systems, which means the signalling, have therefore been designed with this in mind.

The trains will travel at up to 360 km/h (224mp/h), faster than any other train service in Europe and only slower than those in China.

The alignment of the track on the first stretch between London and Birmingham means even faster trains could reach 400 km/h on HS2 in the future.

The track will also sit on concrete “slab track” which is durable but more expensive to buy than your more conventional ballast.

When you start planning a major infrastructure project such as HS2, experts are supposed to make informed estimates about the amount of time and money needed to complete each phase.

HS2 Ltd has been widely criticised for not factoring-in enough risk and uncertainty into its calculations.

One of the big unknowns, which was underestimated on the first phase, was “ground conditions”.

Now that surveys underneath the surface along the route from London to Birmingham have been done, the higher costings for that first stretch are regarded as more robust.

And that’s why the price tag for the second phase of HS2 is not certain.

HS2 will wind its way through a crowded landscape. The initial stretch from London Euston to Old Oak Common in west London will be through a giant tunnel underneath central London.

To build the line, HS2 Ltd has to compulsorily purchase land and property rights along the route, and a block of flats in London doesn’t come cheap.

HS2 Ltd’s land and property calculations, which it was using as recently as 2015-16, were woefully underestimated.

In one of the studies commissioned by HS2 Ltd, and seen by the BBC, a large number of properties were not even given a value.

Since then HS2 Ltd has carried out more thorough work to improve its estimates.

Try to imagine all of the wiring and piping underneath our crowded cities.

Much of the work HS2 Ltd has already carried out between London and Birmingham has been diverting those connections away from construction sites.

But in some places, roads and even rivers need to be moved too.

On the M42 near Solihull they have been building the foundations for a new bridge over the motorway. A bridge nearby will be demolished and the new bridge moved in.

You could find multiple examples like that along the 330 mile route.

I’ve travelled extensively on Spain’s high-speed AVE network, which flies through large stretches of desolate, arid countryside. Britain is much more densely populated, so building HS2 is a different ballgame.

You might be surprised to hear that the view out of the window from an HS2 train from London to Birmingham, most of the time, won’t be very exciting.

That’s because a large part of the route will be built in what’s known as “cuttings”.

Cuttings mean the track is effectively below ground with banks either side. The cutting reduces the impact of the line on the surrounding countryside.

There are also 25 miles of tunnels on the first phase of the project. The longest (10 miles) and deepest tunnel (90 metres at the deepest point) will go underneath the Chilterns.

And there are 12 miles of viaducts. A two mile viaduct in the Colne Valley in Buckinghamshire will be the longest in the country.

When prior estimates of costings on HS2 have been calculated, efficiency savings have been factored in. However, often those efficiencies have not been realised, so costs have gone up.

In a major infrastructure project such as this, the company in overall charge – HS2 Ltd – contracts out the work to a vast array of other companies.

Companies contracted by HS2 Ltd in the early part of the project carried the risk associated with the work. That pushed prices up significantly.

According to the National Audit Office it added at least £1bn to the overall budget. However, there have been reports that figure was much higher.

Now contractors do not carry the risk. That should help keep prices down.