Huawei 5G verdict is a decision with few good options 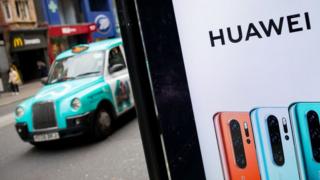 Whether to allow Huawei to help build the UK’s 5G network is one of the most consequential and difficult national security decisions government has faced.

The decision – due to be made at a meeting of the National Security Council later – involves balancing complex technical risks with geopolitics and costs to the economy.

But it is also an issue where room for manoeuvre is tight – partly thanks to a series of decisions going back over the years which have closed down options.

If you want to understand how we got where we are, it is worth going back more than a decade and a half to when BT was upgrading the UK’s telecoms infrastructure.

It wanted to use Huawei equipment because it was cheaper.

BT – using a trick that operators are still using today – warned that excluding Huawei would cost vast amounts of money requiring compensation from the government.

Few at the time appreciated the significance of the decision.

It was only after it had been taken that officials began to question whether it had opened up the UK to surveillance or even sabotage from China – something Huawei itself has always said is impossible.

And so a strategy was created to minimise the danger.

Steps included making sure there were multiple suppliers in the network and ensuring risky vendors (in others words Huawei) were kept out of the most sensitive parts of the network (for instance the core which controls how it functions).

The history means the UK intelligence community believes it has a much better understanding than anyone else about how to manage the risk from Huawei.

As the use of Huawei spread to other telecoms operators, the Huawei Cyber Security Evaluation Centre (HCSEC) was created to carefully evaluate the physical equipment and the code that Huawei was introducing into the UK.

I visited what became known as “the cell” in Banbury 2013.

The security was intense – in one inner room a computer with access to the Huawei source code sat watched by CCTV cameras to prevent any unauthorised access.

No deliberate backdoor or evidence of espionage has ever been found. But there have been issues.

A 2018 oversight report was highly critical of the company’s engineering standards, and the 2019 report said no material progress had been made to address those concerns, which left it with only “limited assurance” that security could be protected.

This experience though has created a degree of confidence from intelligence and security officials that they can mitigate the risks of using Huawei in a 5G network, by putting in place a suite of restrictions.

But they also caution that the ultimate decision has to be political since it involves balancing the technical advice with the diplomatic and economic costs.

The 5G network is being built partly on top of 4G, so excluding Huawei from 5G in the UK (unlike the US where it plays almost no role) also means ripping it out of 4G.

That will be costly and slow down the roll-out of increased connectivity, which this government has made a priority.

That decision has also been made harder by delay – it was due to be taken nearly a year ago but leaks and elections have got in the way.

In the meantime, 5G is already being rolled out. The telecoms operators have been pressing their case to use Huawei and using its equipment.

This means the costs of excluding the company have been going up by the day. Saying “no” will slow down the much-heralded promise of greater connectivity.

But delay has also given the US and critics more time to marshal their arguments against using the Chinese company, including presenting a recent dossier – although UK officials say it lacked any “smoking gun”.

The US has said it will review intelligence sharing if the UK does use Huawei.

UK officials believe – or perhaps hope – that Washington is bluffing. That is a big call.

One of the challenges is disentangling this subject from the broader trade confrontation between China and the US, and the unpredictable nature of President Trump.

At times, there have been signs that Huawei has become a bargaining chip in that broader battle. UK officials may have feared that they could exclude Huawei and anger China, only to find the US President cutting a deal with Beijing and leaving them isolated.

Some British officials caution that this overlooks the fact that concerns about the company go much deeper in Washington, where national security officials are increasingly focused on the technological challenge from China.

The US has taken a hard line because it knows the UK decision has global significance.

Many other countries are going through similar debates right now. Like the UK, they would like to use Huawei because it is cheap but fear the security risks and the wrath of the US.

If the UK approves the use of Huawei many of them may use that as cover to follow suit. Few others though have the technical experience of monitoring Huawei that the UK has built up.

The global perspective goes to one of the wider long-term risks.

Some people ask how we have got to a position where we are needing to even consider using Chinese technology.

The answer is because Western countries failed to think strategically about protecting or nurturing their own full spectrum telecoms industry over the last two decades.

Companies went bust or were taken over. Meanwhile Beijing pursued a focused long-term strategy to become a leader in the technology.

Approval for Huawei in the UK with others following in its wake, would be likely to accelerate the company’s rise and the risks of dependency.

The risks of it becoming a dominant player were expressed by former Foreign Secretary Jeremy Hunt.

“The issue is what happens if we get to the situation where no Western companies are really able to compete with Huawei going forward,” he told the BBC. “Like it or not, in a decade’s time people will look back and say, ‘was this really wise to take this decision in 2020 that has led to this dependency?'”

The US is talking about building greater Western capability in this field, but it is not yet clear what this actually looks like or how long it would take to deliver. And there is a lot of talk in Washington about having lost 5G but making sure not to lose 6G.

Huawei itself has always maintained that it is not an arm of the Chinese state and will not spy on its behalf.

But the more dominant it becomes in the coming years, the harder it might be to extract the company from a network if it was found to have done something wrong.

So Tuesday’s decision comes down to balancing significant but hard to quantify long-term risks with real short-term economic costs. Past decisions have narrowed the UK’s options.

And this one may do so again.