“I launched my business while living on the streets” 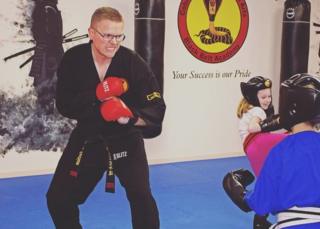 From sleeping in a phone box to founding a six-figure business teaching martial arts, it’s been an eventful two years for Gavin Eastham.

In February last year, he found himself being pelted with hailstones on his first night on the streets.

The 36 year-old’s marriage had broken down and, having suffered a back injury, he wasn’t able to work.

“Because I’m not originally from North Wales, it meant I had no contacts. I had nowhere else to go,” he said.

His ex-wife thought he had somewhere else to stay but he didn’t.

He decided to go to the local library, initially to stay warm, but he felt time-pressured to turn things around.

“I thought the minute I was homeless, I’d look homeless and if I look homeless people are going to look at me in a certain way,” he told the BBC’s Wake Up to Money.

After spending a few days there, the local librarian became suspicious. He told her he had plans to set up his own business.

“I thought I need to make a positive change, I need to do something,” he said.

Strategy by day, shelter by night

He was also using the library for something more pressing: “I was actually researching how to survive being homeless. I’m a bit of a city boy so I did a bit of research reading blogs and forums about how to survive on the streets.”

While at night he’d focus on finding shelter, by day he was reading books on business strategy.

“This sounds crazy but the only thing I’ve ever been good or half decent at was martial arts. How could I turn that into an opportunity to secure my future?”

He started researching and came up with a company name and logo, wrote a syllabus and bought a domain name for £1.58.

“This dream I thought that I might one day fulfil was giving me the energy I needed to survive.”

After three weeks on the streets, he managed to secure temporary housing and then, in May last year, launched his martial arts school Cobra Life in Flintshire, Wales.

Now he says he has a “thriving business, turning over six figures.”

With plans to franchise, he’s looking to hire a full-time instructor: “That is going to give me chance to get off the dance floor and onto the balcony, to strategise and expand,” he said.

He said the teachings of martial arts gave him the strength to continue: “Those essential skills have been instilled since a child so even though times were tough I knew I had to persevere and focus on my goals which were simply dreams written down!”