‘I remember the roaches walking across the floor’ 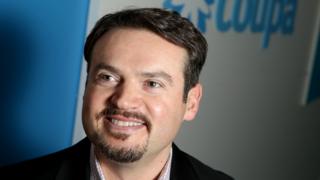 Rob Bernshteyn is estimated to be worth $74m

The BBC’s weekly The Boss series profiles different business leaders from around the world. This week we speak to Rob Bernshteyn, chief executive of US software company Coupa.

When Rob Bernshteyn and his family finally managed to escape the Soviet Union, they initially found that the US was worse.

“We settled in a pretty tough neighbourhood of Brooklyn [New York, in 1980],” says Rob looking back. “You didn’t want to be walking round at night unless you were carrying. I mean, this was a rough neighbourhood, very rough. New York was a different place back then.

“The apartment we were in, I remember the size of the roaches, an inch and a half, walking across the floor. There was graffiti everywhere when you walked down the street, and you constantly heard the sirens of ambulances and police. All of it was really scary for us.”

Now 44, and a successful US business leader, Rob was just six when he and his parents were able to swap Leningrad (today’s St Petersburg) for New York. A Jewish family, his parents wished to get away from the anti-Semitism they were facing in the Soviet Union, and also gain the economic opportunity on offer in the US.

So risking the wrath of Soviet authorities, his father and mother – both engineers – applied to emigrate. “It took four years for them to get approval,” says Rob.

“There was a real risk in applying, because if you got rejected you were called a “refusenik” and often those folks lost their jobs. Many wound up on the street, and some got shipped to Siberia.

“But luckily we were on the list that was allowed to leave, and there was a [Jewish] agency in the US at the time that helped.”

His family arrived in the US with just $1,000 (£765) and two suitcases, and Rob says he can remember his dad taking him “dumpster diving” to try to find discarded furniture that he could patch up and put in their small flat.

Thankfully his parents were both soon able to find work; his father with engineering giant Honeywell, and his mother with the New York Department of Environmental Protection. But Rob initially had a much harder time at school.

“It was a really tough school in Brooklyn, and I got beat up pretty badly for being seen as a, you know, communist, and all that,” he says.

Rob says that things improved as he started to lean English, and he found that he was academically gifted, especially at maths. Home life also got a lot better when his parents had saved up enough money to move out of Brooklyn to suburban Long Island.

After secondary school Rob did a degree in information systems at the State University of New York at Albany. He then began his working life as a management consultant, first with Accenture and then McKinsey.

In 2000, aged 24, he took time out to do the celebrated master of business administration course at Harvard University, before going into the software industry. Moving to Silicon Valley he spent a number of years with first Oracle, and then SAP.

But ultimately keen to be his own boss, in 2009, aged just 32 he took up the top job at a small software business called Coupa. Set up three years earlier, Coupa makes cloud-based procurement systems to enable companies to more easily buy all the supplies they need, such as laptops and office chairs – or the cleaning firms they employ.

Rob had ambitious plans to expand the firm, but with the global financial crisis still in full swing at the time it was a struggle to secure financial backing.

“I pitched to investors three or four times a day, for weeks on end, and no-one was believing me that Coupa could become a multi-billion dollar company,” he says. “Some three dozen people rejected me.

“Then right before we were going to run out of cash I found a venture capitalist who decided to get behind me more than the company. We got $7m, which valued the business at $15m.”

From that point on, sales at Coupa have continued to rise steadily, thanks in the main to positive word of mouth. Today, its thousands of clients include sportswear brand Adidas, bank BNP Paribas, drinks firm Britvic, retailer Office Depot and aerospace business Rolls-Royce.

With quarterly revenues of more than $100m, and 2,000 employees, Coupa – which floated on the Nasdaq stock exchange in 2016 – now has a market capitalisation or value of £10bn.

“Great tech matters of course, but it’s how that tech is used for bottom line benefit that really matters,” he adds. “Bernshteyn last year commented that Coupa had earned legitimacy among enterprise buyers at some of the world’s largest companies. There was a lot of hard work that went into achieving that.”

Looking ahead, Rob says he has no plans to slow down or learn how to relax more. “This isn’t really work for me, it’s a way of life… I really enjoy it.”

Estimated to be worth over $74m, he says his parents are proud of what he has achieved. So does he ever wonder how his life would have been if they had been forced to stay in the Soviet Union?

“I don’t really think about it, I spend my time thinking forward. But it wouldn’t have been great, because I know from some relatives and others that stayed there that it didn’t turn out so well.”