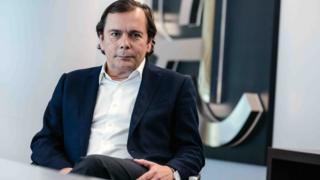 The BBC’s weekly The Boss series profiles different business leaders from around the world. This week we speak to Federico González, chairman of the Radisson Hotel Group.

Federico González spends 250 days a year away from home.

But the 55-year-old Spaniard does not have to worry about finding a place to stay as he trots around the globe.

The boss of the 1,400-location strong Radisson Hotel Group does, however, admit that he can be a huge distraction for the staff when he books in somewhere.

“If the CEO comes, it’s a nightmare for them, everyone tries to be nice, but actually, it distracts them from helping the other customers.”

In the top job for the past two years, a recent business trip saw him staying in St Petersburg for three days, Moscow for two, Shanghai for two, and Bangkok for one.

The only two cities where Radisson hotel staff do not face the distraction of him booking a room is Madrid and Brussels, as he maintains homes in both capitals. Madrid is where he was born and raised, while the company has its headquarters in Belgium.

Speaking at the May Fair Hotel in London, Federico says that a good hotel has to create lasting positive memories

Such a globe-trotting job suits Federico, who speaks four languages, and has been restlessly travelling since leaving a “traditional middle class Madrid home” as an 18-year old.

On a mission to broaden his horizons, while studying at the Complutense University of Madrid, his journey started in the north of England in 1982.

“I came to Sheffield and Chesterfield on student camps,” says Federico, sitting in Radisson’s five-star May Fair hotel in central London. “Then I became a tutor to Spanish students who were coming to the UK to live with British families to learn English.”

During this time Federico acted as a guide, showing students around London. It helped him hone his English, and he eventually applied for first job in the corporate world.

“I was 24, and I saw a job ad at my university for [consumer goods firm] Procter and Gamble [P&G],” he says. “They needed Spanish and English speakers, I got an interview. And when they asked me, ‘would you prefer to work in finance or marketing?’, I asked them what marketing was. I didn’t know!”

After some quick research, Federico picked marketing, and soon rose up through the ranks of P&G Spain. By the time he left the company in 2004, he was head of its Portuguese division.

Then came his first foray into hospitality with a move to Disneyland Paris as deputy general manager. So what did he learn from days spent fraternising with Mickey Mouse and Donald Duck? “I realised everything was about the experience, and the importance of memorability.”

In 2013, he moved in to the hotel trade, running Spanish business NH Hotels. He took up the top job at Radisson in 2017, and says he is still obsessed with the need to give customers positive memories.

“A shower is not a shower, it [has to be] a ‘wow shower’,” says Federico. “It’s about putting temptations in the room – chocolates you might take home with you. Or if someone is alone in the room, they might just think ‘no one is looking so I’ll eat them’.

“Those are small elements that along with the location, decor, and people, make the experiences memorable.”

But with the hotels industry facing numerous pressures, such as slowing economies, environmentalists who want to see less air travel, and competition from Airbnb, what other ways can hoteliers stand out from the crowd?

“How do you differentiate yourself in what appears to us to be a hugely saturated market?” says Alice Hancock, leisure industry reporter for the Financial Times,

“That’s the problem the whole industry is grappling with. If you look at big names like Marriott, that has over 30 brands. The idea is that each brand caters to a different segment of the market – luxury, budget, traveller and so on. The benefit to the big companies is that they can have five or six hotels in the same radius, because they look different to the consumer.”

Ms Hancock reckons there is still plenty of demand for hotel rooms, and plays down the impact of Airbnb. Although she says that the home rentals site has has one definite effect – it has increased demand “for non-identikit hotels”.

This is part of the reason hotel businesses like Marriott are differentiating themselves. Radisson is no different, and it now also owns subsidiary brands Radisson Blu, Park Plaza, and Country Inn & Suites.

Radisson’s own ownership changed last year when it was sold to a consortium led by Jin Jiang International Holdings, a Chinese state-owned tourism company. Federico says the Chinese owners give him freedom to run the business.

“There’s no job in the world where you have complete control unless you own the company, and not even then, because maybe banks will control it,” he says. “What’s important is that you have very clear rules. Do I have freedom to do what I want to do? Yes.”

There are factors out of his control though, such as Brexit – which Federico says has been “stable” for his chain so far. Radisson was also hit by a data breach in 2018, which affected members of its loyalty and rewards scheme.

Federico was new in his job at the time of the cyber attack. “We apply the most rigorous procedures, but there are always mistakes and failures,” he says. “We’ve applied new protocols, and it’s important to do the most you can, and to react quickly, but no one can avoid it.”

As the father of three grown-up children continues to visit numerous hotels every month, there is one thing he won’t discuss – which one he likes the most.

“Hotels are like kids,” he says. “There’s no favourite kid.”