‘I still have confidence in package holidays’ 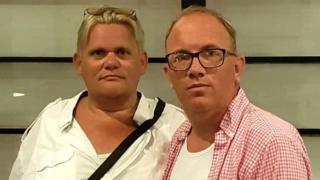 New research suggests most people still want to book package holidays despite what happened after the collapse of Thomas Cook.

The failure of the UK’s oldest travel company highlighted the consumer protection provided for holidays booked through an agent.

That’s what Simon Whitwood thinks. He and his partner, Reggie Grice-Whitwood, saved for three years for their luxury three-week honeymoon to the Dominican Republic.

The couple flew out the day Thomas Cook went into liquidation on Monday 23 September.

“We were getting excited about our holiday – we managed to get an extra week off work,” says Simon.

“We had saved £3,500. But just as we went through passport control, I got a message from my mum saying that Thomas Cook was about to go under. If we didn’t go, we would have lost everything.”

Simon says they weren’t able to enjoy their holiday because they were worried about how they were going to get home.

“It wasn’t like a holiday where you could relax and let your hair down, because there was constant nagging in the back of your head,” he told the BBC.

The couple’s holiday was cut short by two days, but they were returned home to the UK on a flight organised by the Civil Aviation Authority as part of Operation Matterhorn, as the rescue of stranded holidaymakers was dubbed.

Despite their experiences, Simon and Reggie want to relive the holiday without the stress. They’ve started saving up again and plan to return to the Dominican Republic in the next couple of years.

They say they’ll book the holiday as a package because of the consumer protection offer by the ATOL scheme, administered by the Civil Aviation Authority.

The ATOL scheme started in 1973 after a spate of travel businesses failed, leaving people stranded overseas. Everyone who books a package holiday pays £2.50 into it.

If a travel company goes bust, the money is used to bring travellers home. If they haven’t been away yet, they will be refunded.

Simon and Reggie are not alone in wanting to book a package deal. Research for Radio 4’s You & Yours suggests there is still confidence in the package holiday market.

The package holiday market has had five consecutive years of growth, according to the Office for National Statistics. Many of these holidays are booked through High Street agents.

Polka Dot Travel has 18 travel agents and plans to open at least two more shops in 2020.

The group’s head of sales, Jenny Lyons, told You and Yours: “Ten years ago, everyone booked their holidays online. People thought they were saving money by booking travel and accommodation separately.

“But people want reassurance now and you can’t put a price on that. Nothing can take the place of the travel agent who you build a relationship with.”

Other companies are also expanding into the package holiday market.

No-frills airline EasyJet recently announced it is offering more package holiday deals, while Virgin Holidays is also cashing in on the gap left by the collapse of Thomas Cook.

“People will always want to go on holiday,” he says. “This year, holidaymakers will be looking for bespoke package deals which might be multi-location.”

Paul Smith from the Civil Aviation Authority that administers the ATOL scheme said: “We repatriated 140,000 people, most of them when they expected to come home. The ATOL scheme is still in place and people should book with confidence this year.”

You and Yours’ special on the package holiday industry airs at 12:15 on Wednesday 1 January on BBC Radio 4.