‘I swapped Chelsea FC for the City’: From goalie to Goldman Sachs 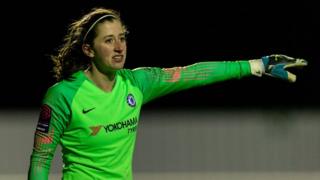 When Chelsea Women open their season against Tottenham Hotspur Women in front of a full Stamford Bridge this Sunday, one ex-Blues player will be watching with mixed feelings.

Lizzie Durack quit as a Chelsea goalkeeper this summer to follow a new financial career in the City of London, and many of her friends will be in action as the FA Women’s Super League kicks off.

And, while they have been taking part in pre-season training, she has been getting her feet under the table at Goldman Sachs in their Prime Brokerage Division, working with wealthy hedge fund clients.

So why – at the age of 25 – has she quit one of England’s top teams, with arguably the best years of her playing career still ahead of her?

“I made my decision for a lot of reasons, and obviously it was a difficult one to make.” says Durack, who has a degree in economics and neurobiology, and had previously served an internship at Goldman Sachs when she was a student.

“The main one was – I had come to a point in my football career where I had achieved a certain amount that I was happy with. In order to take the next step and be one of the best in the game, it would have taken five years or so – if I was ever going to be fortunate enough to actually achieve that top level.”

During the 2018-19 season, Durack found herself behind two other goalkeepers in the Chelsea pecking order, and by the end of the season there were four goalkeepers at the club vying for places.

“I had to make this big decision, and take on board the realisation that opportunities for a young goalkeeper are hard to come by,” she says.

“I had thrown myself into football since my teens. It got so I was wondering if I should start a financial career further years down the line, or just say ‘it has been a great time, now is the moment I should invest my energies into the world of finance’.”

Durack – who now works in “capital introduction and consulting” at Goldman Sachs – talked things over with her parents who said they would support whatever decision she made.

Similarly, she said Chelsea women’s goalkeeping coach Stuart Serle was supportive, asking her to think again, believing she had potential and could kick on in football.

Born in Australia, she was the only girl in her school football team, went on to study at Harvard in the US for four years, won a full international cap for her mother’s homeland England, and played professionally for both Everton and Chelsea.

But a different career was never far from her thoughts, and during her last two years as a player she found time to study for the Chartered Financial Analyst (CFA) programme for investment professionals, and has passed her CFA Level 1 and 2 exams.

“It was starting to annoy me to see my academic peers getting on with their careers,” says Durack, whose father is from Sydney and mother from Doncaster, “I felt I was missing the intellectual stimulation that a career in finance could give me.”

Durack had joined Chelsea in 2018 after a second spell of playing at Everton, where she says she had a rather “volatile period as a professional”.

“I did enjoy my year at Chelsea, it helped me to see what I really wanted,” she says. “I was grateful for the opportunity at Chelsea.”

“We didn’t have a great season last year, it was not a successful season by Chelsea standards, it wasn’t ideal, but those things come in waves, and in sport you have to deal with the ups and the downs.”

Now Durack is getting to grips with what she calls “a huge lifestyle change”, with her typical working day doubled from the six hours spent as a football pro, to ones of 12 hours or more.

“I am going into a very client facing role,” she says. “I am immersed in a very intense environment – I wanted to replicate sport.

“I have always found, in any role, that the people you work with can make or break the experience.”

Her salary will be more than in football, but she says more money “is a consequence, rather than a reason”, of the change. If cash was her motivation, she would “not have gone into football otherwise”.

“I was very much on a living wage at Chelsea, I wasn’t rolling in money,” she says.

Durack, who also played for Australia at Under-17 level, and England at numerous age levels, says sport and business have a number of similarities which will stand her in good stead in her new job.

“In both you need to be disciplined, confident, and resilient,” she observes. “Both are a roller-coaster existence, and things can get heated at times.

“But there is some more control of your life in finance. In the City although the hours are long and intense, but you have the ability to book a week of holiday, In contrast when the football season starts you are locked in for 10 months.

“Also luck plays a bigger part generally in football, and work-rate does not always mean winning success or even being selected for the team – sport is more subjective.”

She says this summer’s Women’s World Cup was a great success, and that the sport in the UK should be trying to piggyback more on the men’s game to continue building awareness.

“Getting some of the men players at clubs on board to promote the women’s side of the game would be a great help,” she says.

“And, groundsmen won’t thank me for saying this, but I think they should have a women’s game opening for the men’s games. It should be considered a ‘one club’ thing, if you are a Chelsea fan, you are a women’s team supporter too.”

Looking ahead she says: “I hope to go along on the opening day, and follow Chelsea this season. The saddest thing for me is leaving some of my good friends and team-mates behind, and I still feel keenly about what they do.

“But any full time athlete will tell you about the sacrifices. I have made them, and it has been worth it, but all the hours add up and you often can’t enjoy being a 25-year-old. I couldn’t travel with freedom, or go and see my family in Australia with freedom. I am now looking forward to this new chapter in my life.”