‘I tested my new name at the coffee shop’ 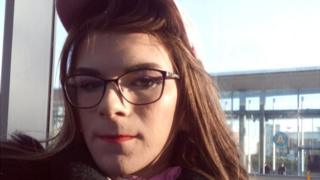 Sonja felt liberated when she said her name to the barista

Giving a barista your name to get a drink may be a typical way to start your day, but transgender young people have been telling the BBC how this coffee shop moment marked the start of their self-acceptance.

“When I first said my name to the barista, it felt so liberating. It was so freeing. To say, this is who I am, this is my new name! I couldn’t believe it.”

Sonja, a student from the West Midlands, came out as a transgender female at 14.

“After coming out, I transitioned fairly quickly. Initially my dad tolerated it, but then the relationship broke down,” she told the BBC.

“My mum was surprised and hesitant. I remember she said, ‘But what are we going to call you now?'”

Sonja had the idea for her name after watching a gaming live-stream, but her mother suggested she take on the name which her parents would have given her if she was “assigned female at birth”.

“I could tell that mum wanted me to use it because she wanted to name me again, but I couldn’t. This transition journey that I’m on is about me and the choices that I need to make for myself, to be the person I know I am.”

Before fully adopting the name, Sonja used her local Starbucks store to “trial” how it would sound for other people besides her friends and family to use it.

“I have quite prominent male features, so for me to use a feminine name in public was quite scary, especially because of the area I live in. I was so anxious walking into the store, I thought I would be tackled by somebody for being outwardly LGBT,” she says.

“The cup with my name on was like a badge of honour – it was a symbol that I finally knew who I was.”

Sonja is one of several young trans people who use coffee shops in this way. When Starbucks eventually found out about this last year, they contacted Susie Green, the chief executive of leading trans equality charity Mermaids.

“I posted on our forum asking for young people to come forward if they had done a similar thing – I had 20-30 messages back within a few minutes,” says Susie.

“They all talked about how nerve-wracking ordering with a new name was, but many of them still had their first cups!”

While the debate around trans equality continues, Starbucks UK has told the BBC it will be partnering with Mermaids, to highlight their work and explore how trans customers use their stores.

Mermaids has seen a 600% increase in demand for its helpline services in the past five years, with young trans people and their families taking advantage of the support.

The organisation has said that “transphobia is everywhere” in UK society. Some LGBT activists have flagged concerns about anti-trans vandalism or a backlash in retaliation against the partnership – something Susie Green says the charity is “always prepared for”.

Alex Rayner, general manager of Starbucks, acknowledges that “this campaign may create conversation”.

However, “measures are in place” to address any safety and security concerns of their customers and employees, she says.

“This is a celebration of trans people, of all ages, that have found Starbucks stores to be a safe space to trial their new name and be recognised as who they really are.”

Corporations that suddenly show support to the LGBT community have previously been accused of “rainbow-washing”, but Alex Rayner denied this.

“This campaign is inspired by real experiences where people in the trans community found Starbucks stores a safe place to trial their names.”

Sonja believes there are pros and cons to “rainbow-washing”.

She says: “There is so much ignorance and discrimination that surrounds the whole LGBT community, it will take large corporations to publicly and outwardly support our lives to reduce levels of intolerance in society as a whole.”