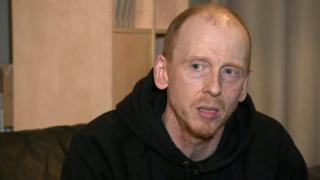 After taking out one loan after another, then adding credit card debt, Darren had borrowed £32,000 he could not pay back.

The 44-year-old, from Stoke, was juggling minimum payments and was struggling to cope.

“I was not reducing the debt, it was just going up month after month, year after year,” he said.

“I had all the highs of spending the money, but when I was low, it was low. It consumes every thought, every moment of the day just worrying about debt. It was awful.”

Credit card companies have been told to write to between one million and two million people who are struggling to cope with debt and have paid no more than their minimum repayment.

Darren received help and is now debt-free, but many people who are in the situation he found himself in are said to be in persistent debt.

This is defined as when customers have paid more in interest and charges than they have repaid of their borrowing over an 18-month period.

Previous research by the City regulator, the Financial Conduct Authority (FCA), found these cardholders were paying an average of £2.50 in interest and charges for every £1 of debt they repaid.

Under its rules, credit card lenders are supposed to negotiate a manageable and sustainable repayment method and show patience if customers cannot pay the money back.

As of March, they also have the option of cancelling cards as a last resort.

But now, the FCA is worried that providers will jump straight to a wide-ranging programme of simply stopping the cards, without proper justification.

This holds the danger of making a bad situation even worse by cutting off access to credit.

The regulator has written to the firms to express its concern that many of them could be planning a blanket suspension.

“If we find firms are not offering their customers the appropriate level of help, we will not hesitate to take action,” said Jonathan Davidson, from the FCA.

‘If the firms do this right, we estimate that this could save customers up to £1.3bn a year in lower interest charges.’

How to find assistance

Debt advice groups and charities said people in these kinds of debt should not panic, but nor should they ignore letters from their credit card company. Instead, they should seek help.

“New rules mean that they have to tell you when your repayments have been going more towards interest, charges and fees than the amount you actually owe,” said Andrew Johnson, from the Money and Pensions Service.

“You might be encouraged to increase your payments but if this would cause you more financial difficulty they have to offer you help.”

The service has a guide on where to find free debt advice.

How the debt racks up

What are your experiences with debt? Share your stories by emailing haveyoursay@bbc.co.uk.