‘I was sacked and silenced for being trans’ 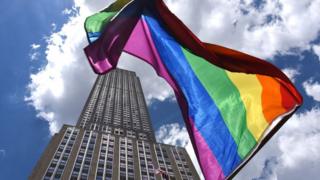 “I had only just come out and I was feeling anxious about my transition already, but all of the staff and colleagues were initially really fantastic and adjusted to it really quickly.

“That lasted about a month,” Charlie – who did not want his real name used – told the BBC.

He is a 31-year-old transgender man, who worked as a waiter for one of the UK’s leading restaurant chains.

The BBC has seen evidence that Charlie was sacked from his job and paid to stay silent about the transphobic abuse his manager subjected him to.

It says “more employers than ever are taking LGBT inclusion seriously”, but says its research also shows that more than a third of LGBT staff have hidden their identity for fear of discrimination, while one in eight trans people have been physically attacked by a customer or colleague.

“No-one should ever feel unsafe at work or worried that if they are themselves they might lose their job,” it adds.

“The more organisations that stand up for equality, the sooner our workplaces and communities become places that accept and support LGBT people – without exception,” Kate Williams, head of private sector memberships at Stonewall, said.

The BBC has spoken to LGBT people from across the UK who are still unable to be themselves at work. Charlie is one of them.

‘Too scared to confront her’

He says when one senior restaurant manager returned from maternity leave and met Jake for the first time, she refused to acknowledge his transgender identity.

Charlie also says his manager searched through his staff records to prove he was trans.

“She would walk up to me when I was serving tables and address me by my very female birth name in front of customers.

“She would tell my colleagues: ‘You know he’s got a vagina, don’t sit near him’. I was so embarrassed, but I was too scared to confront her.”

Charlie was eventually sacked from his job for gross misconduct, although the firm provided no evidence for its decision.

So Charlie contacted the restaurant’s head office and told them what had happened, detailing the transphobic abuse.

“It was clear that the company didn’t want paper trails, because the operations director phoned me and said they would give me a substantial sum of money to not go back to any of the restaurants again.”

“They transferred me around £5,000 and told me to never speak to the media, or anybody working for or associated with the restaurant.”

The ‘most inclusive’ workplaces in the UK

Newcastle City Council has been revealed to be “the most inclusive employer in the UK”, according to Stonewall’s annual index.

The charity said Newcastle was the first local authority to reach the number one position since it started its annual ranking 16 years ago.

The council ran numerous events over the past year, campaigning, supporting and highlighting the LGBT community.

The BBC also spoke to Adam, who also did not want his real name used. He is a 20-something year-old model and actor from Oxford.

He says since being open about his sexuality he has gone through years of sexual harassment from various colleagues.

“From my social media profiles it is pretty clear that I’m gay. I’ve had casting directors, producers and writers treat me in inappropriate ways because they think I’m an easy and willing target for their sexual desires.”

Adam was invited to dinner by a major London acting agency while he was looking for representation.

“At first I was just really excited to get any response from an agent, then I continued reading and saw his invite to dinner.

“I was already really cautious about these types of meetings. But then I saw on Facebook that this male agent had a wife and children who he always posted about, so I thought why not?”

The agent told Adam he wanted to give him some advice on his social media presence.

“He started scrolling through my Instagram photos and made really awkward sexual comments about my topless pics.

“I tried to laugh it off, but then he suddenly stroked my genitals under the table, and whispered: ‘You scratch my back, I’ll scratch yours.’

“I sat there in shock. I felt really sick. He told me that I would only have to do it once, and to try to convince me he said: ‘Come on, it’s not like you’re straight.'”

Adam says he always hears about things being done to improve workplace experiences of LGBT people who are office-based, but he questions what is being done for those in entertainment.

“I know so many actors hiding their sexuality because they think it will hold them back from getting certain roles.

“Those of us waving rainbow flags must seem like easy targets to these predators with power,” he says.

“Just because I am open about being gay, and I work in an industry very much based on going out and networking, does not mean I am open to sleeping with every person who wants me.”