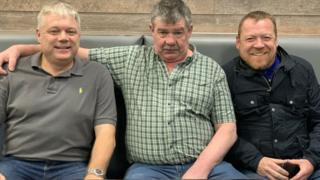 Crewe and Nantwich is one of the UK’s most marginal constituencies, with Labour taking the seat from the Conservatives in 2017 by just 48 votes. With days to go until another general election, what issues are firing up voters?

There was a time when you couldn’t move for bikes outside the town’s famous Crewe Works. Row upon row of them were parked up on the pavement, their owners among the thousands of workers inside West Street’s huge warehouses, building locomotives for the UK’s railways.

As employees prepared to down tools at the end of the day, staff at the town’s many pubs along what was known as the “Golden Mile” were pulling pints, lining them up along the bar ready for the teatime rush.

At Nantwich Road Working Men’s Club – itself built to serve the town’s railway workers – regulars are reminiscing about the good old days.

At its height, Crewe Works employed 20,000 people. Today, transport manufacturer Bombardier employs about 320 on the same site. Its future prospects could be boosted if it secures a contract to service rolling stock for High Speed 2 (HS2). “If it happens,” says a weary Mick Cartwright, a Stoke-on-Trent native who’s lived in Crewe for more than 20 years.

Last year, Crewe celebrated 175 years of railway engineering. But the demise of the industry the town was literally built for is a harsh reality its people have had to come to terms with, along with the changing landscape.

“It’s lost its heritage. All the old buildings have gone. They’ve knocked a lot of the wrong buildings down as well,” says Neil Jones, who runs a double glazing firm.

It’s darts night, and the lads from Cheese Hall, a Victorian pub in the heart of Crewe, have arrived at Nantwich Road for the competition.

As the rivals line up at the oche, yards away from an enthusiastic dominos match, one of the touchiest subjects in town is being discussed: the demolition of what remains of the famous Crewe Works wall.

The redbrick structure marked the boundary of the once sprawling engineering site. It is said that during World War Two, black outlines of houses were painted on it to fool German bombers into thinking it was an estate, rather than a factory helping the war effort.

Today it is all but gone, the site behind it crumbling rubble.

The wall stood along West Street for generations, but most of it has been demolished

“The council gave permission to knock it down to build houses,” says Mr Jones. “There’s all these massive changes, but there’s not the infrastructure to cope with it all.”

There’s concern Crewe isn’t quite prepared for the growth the authorities so desperately hope to stimulate in the town.

In many areas, Crewe remains a success story. Luxury carmaker Bentley employs 4,000 at its Pyms Lane headquarters on the same site where Rolls-Royce used to be based.

Cereal producer Mornflake has been growing oats in Cheshire since 1675. Still run by the same family, it has about 300 employees at its headquarters in the town.

Housebuilding, too, is on the up. Cheshire East Council has earmarked land around Crewe for up to 4,745 new homes before 2030. Many projects have been completed, with others under way.

The town’s railway connections, proximity to Manchester, Liverpool and Birmingham, and the fact it is just a few miles from the M6, make Crewe an attractive prospect for commuters looking for reasonably priced homes.

When talking to locals about the new housing estates, the issue of infrastructure comes up again. Are there enough doctors and schools to cope with newcomers, they wonder? “Crewe is full to bursting already,” a club regular comments.

Bentley makes its luxury cars in Crewe, on the site Rolls-Royce once occupied

It is HS2 that could really transform Crewe’s fortunes. If it goes ahead, the high-speed line would go via Crewe with an “HS2 hub station” planned on the site of the town’s main station. Stopping in Crewe twice an hour, HS2 would cut journey times to London from 90 minutes to 55.

Crewe is already a major junction on the West Coast Mainline, with more than 3m people passing through the station each year.

The political wrangling over the £56bn project, however, has naturally left many uncertain it will even happen.

“If HS2 comes here, you may as well say ‘happy days’,” says Ian Smyth, who worked for British Rail Engineering Ltd. “But I think a lot of authorities have put all their eggs in one basket with HS2. If it doesn’t happen, what then?”

Unemployment in Crewe is below the national average. “If you want to work in Crewe, you can get it. There’s a lot of work here,” Neil Jones says.

Iraqi Rozghar Ahmed agrees that work is not hard to find. The 35-year-old, who has lived in Crewe for two months, has found a job in a shop in the town centre. He sought asylum in England years ago, living in Eastbourne and Manchester before coming to Crewe.

He hopes his family can join him here. He likes Crewe, but says he has met very few English people since arriving. “Romanian, Czech Republic, Hungarian… but not English,” he says.

The number of Polish and Romanian shops that have sprung up in recent years are evidence of the town’s shifting demographics. Many of these stores line West Street, home of that once treasured wall.

A resident tells a story of a relative coming back to Crewe for a family funeral, several years after his last visit. “He couldn’t believe how much it had changed,” he says. “He was shocked.”

A marginal seat for much of its history, Crewe and Nantwich is a key political battleground. The closest contest was at the last election, when Labour’s Laura Smith defeated incumbent Conservative MP Edward Timpson by 48 votes.

The main parties are working hard to unite the voters of traditional working-class towns like Crewe and their neighbours in leafier Nantwich. But while the big issues of HS2 and Brexit – Crewe voted to leave – loom large, many people say they are simply looking for a representative who will fight for positive change closer to home.

Lifelong Crewe residents – although they prefer to say they live in Sydney, a village three miles from the centre of town – they say the shopping centre has gone downhill rapidly. The Grand Junction retail park just outside the town centre has sprung up in recent years, but investment in the town centre has been virtually non-existent since a plan to transform it collapsed in 2008 amid the global financial crisis.

“Years and years ago Crewe was quite a nice little town, but now so much is boarded up,” says Mrs Davis. “There’s just not that many shops, and Bonmarché is going as well now.”

The crumbling bus station is a sore point. “It’s embarrassing,” she says. “People coming into Crewe must wonder where on earth they’ve come to.”

There is hope, though. The mid-19th Century market hall is being refurbished, and Cheshire East Council has a £100m masterplan to transform the Royal Arcade area with a new bus interchange, an eight-screen cinema and shops. There’s no date for demolition yet.

It’s a bit of a different story in Nantwich, a medieval market town less than five miles away that makes up the rest of the constituency. It is where the members of Nantwich Road Club might go if they wanted a nice meal. “It’s upper class, it’s vibrant,” Mr Jones says.

Certainly, its characterful streets, pretty Tudor buildings and independent shops indicate a prosperity that people feel is lacking down the road in Crewe.

For Mrs Tomkinson and Mrs Davis, it is the restoration of pride in Crewe that is just as important as investment – the need to create a town where young people want to stay and grow old, instead of losing out to Manchester and Liverpool.

They too reminisce about the heyday of Crewe Works, and the demise of the wall is mentioned once again. They remember fondly the throngs of workers leaving the factories, spending their wages in the town’s shops and pubs.

“They didn’t have much, but they were happy,” says Mrs Tomkinson.

“They were good times and good people.”

The candidates standing in Crewe & Nantwich are: