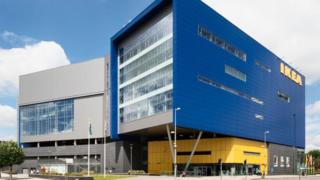 Ikea’s Coventry store was built in 2007

Ikea has announced that it will shut down its Coventry city centre store this summer, in its first big closure of a UK outlet.

The Swedish flat-pack furniture giant said the store had made “consistent losses” since it opened, with fewer people visiting it than expected.

It said it would be consulting the 352 workers affected and would try to find them jobs at other stores.

Ikea added that it remained committed to growth in the UK.

“Ikea’s Coventry store, one of 22 Ikea stores in the UK, was built in 2007 in the city centre and was one of the retailer’s earliest examples of testing a new format to meet its customer’s changing needs and expectations,” the firm said.

“However, given its location and the size of the land available at the time, the store was built over seven levels, which resulted in a significant impact on the operating costs of the store and the shopping experience for customers.

“In addition, the changing behaviour of customers in the area who prefer to shop in retail parks and online has resulted in visitor numbers being substantially lower than expected and continuing to decrease over time.”

After the closure, customers will have to journey to Nottingham, Milton Keynes or Birmingham to find their nearest Ikea branch.

Ikea stores are generally in out-of-town locations and the firm has made various attempts to bring its outlets to city centres.

In 2018, it closed three smaller inner-city collection-point stores in Norway, which had been a test for a new format that it hoped to roll out worldwide.

Other retailers have been harder hit by the rise of online shopping, resulting in the disappearance of a number of well-known UK High Street brands.

Already this year, department store chain Beales has fallen into administration, while John Lewis has warned that its staff bonus may be in doubt after it reported lower Christmas sales at its stores.