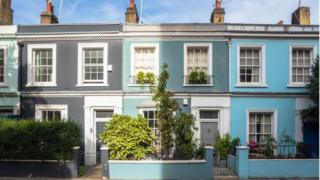 When Des Kinsella bought a leasehold flat he expected a bill of up to £20,000 to extend the agreement.

Instead, the ultimate owner of his property is asking for £42,000. Almost a third of that is for something called marriage value.

It’s something Mr Kinsella and other leaseholders want abolished.

“I don’t agree with marriage value at all,” he says. “It’s there to make the valuation higher for the freeholder.”

When a homebuyer purchases a leasehold property, they do not possess it outright. Instead they gain the right to occupy it for a set number of years.

When the flat is then sold again, the number of years left is also sold, rather than a new contract being drawn up. At any point, a lease owner can ask to buy more years.

When the agreement is extended, the leaseholder pays a premium for the extra years, like any rental payment. They will probably also part with a lump sum to pay off the ground rent. And most people try to do this before 80 years are left.

This is because extensions for a flat with fewer than 80 years remaining will attract a third payment, called marriage value.

For freehold investors, it’s a bountiful source of revenue, and one they will not want to lose.

Both groups await a report on Thursday from the Law Commission, which is considering whether to recommend reform in the leasehold sector.

It’s a big market, especially in big cities. There are no official figures, but the market could be worth £2.5bn a year, the Association of Leasehold Enfranchisement Practitioners estimates.

About a fifth of the 100,000 or so renewals per year may be for properties where marriage value is payable.

While leasehold scandals such as doubling ground rents and restrictions on the smallest renovations have been much-publicised, the complex story of marriage value has had less of an airing.

It shouldn’t really exist, argues Dean Buckner, a former Bank of England regulator and trustee of the Leasehold Knowledge Partnership, which campaigns for reform.

“You are asking someone to pay someone else for something they already own,” he says.

The government’s advisory service for leaseholders describes it as the increase in the value of the property once the lease has been extended. The “profit”, as it calls it, is then shared between the freeholder and leaseholder, hence the payment. Beyond 80 years, according to the law, the value is zero.

Critics like Dr Buckner object to the payment since the leaseholder has already paid for the extension. To consider it a profit is specious, he says, and he points out that it doesn’t exist in deals outside the property world.

Much of that gain will be down to the extra years themselves – a new buyer will pay more for a flat with about 150 years to go than one with only 60, like Mr Kinsella’s. But the freeholder thinks £25,000 of it will be a profit it should share in.

Mr Kinsella says it’s very hard to find a similar property nearby that will sell for even close to that estimate, even with a share of the freehold.

He tells the BBC he is realistic about wanting to pay what is owed, but that a £25,000 gain in value – half of which he will be obliged to pay to the freeholder – isn’t a fair valuation.

If freeholder and leaseholder can’t agree, valuations are decided by a tribunal.

A request for comment from Mr Kinsella’s freeholder, Fable Estates, received no response.

For many property investors, especially in London, marriage value payments will be an important source of revenue, says Katie Cohen, a partner at Keystone Law, where her work includes leasehold extensions and freehold purchases. She advises both leaseholders and freeholders.

“I don’t think freeholders will want much change,” she says. “They would absolutely want to avoid any abolition of marriage value being payable.”

Freehold investors include charities and pension funds as well as others wanting long-term, dependable income.

She says while she anticipates the Law Commission’s report will include some reforms favourable to leaseholders, it is unlikely the payments will be abolished.

If that happened, “freeholders could see the value of those investments decrease rapidly overnight,” she said.

The government could be advised to lower the point at which a marriage payment becomes owed, she says, perhaps to 65 or 70 years, and perhaps lower the percentage which is owed to the freeholder.

For Mr Kinsella, making prices fixed rather than the subject of lengthy negotiation would be a start. Prices should be more easy to calculate and agree upon before purchasing a flat in the first place, he says.

“We did this because we wanted to get our son on the property ladder,” he says.

“And it seems like now he’s so worried about this extra cost that he might even have to sell if we don’t extend it, and look for a place further out of London.”