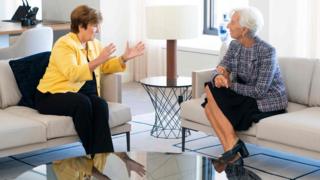 Bulgarian economist Kristalina Georgieva has been selected as the new managing director of the International Monetary Fund.

Ms Georgieva, who was previously chief executive of the World Bank, becomes the first person from an emerging economy to lead the IMF.

She will succeed Christine Lagarde, who is leaving to become head of the of the European Central Bank (ECB).

Ms Georgieva was the only nominee for the job.

Who is Kristalina Georgieva?

The 66-year-old economist, the daughter of a civil engineer, studied political economy and sociology at the Karl Marx Higher Institute of Economics in Sofia while Bulgaria was still under communist rule.

After graduating in 1976, she got her first taste of capitalism in the UK, as a British Council scholar at the London School of Economics.

Since then, she has built up a strong background in the World Bank and the European Commission, having held various senior roles in both institutions.

She was commissioner in charge of the EU budget before she left to join the World Bank in January 2017.

The head of the IMF has traditionally been a European since the IMF was created in 1945.

Normally, she would have been considered too old for the job. But following pressure from France, the IMF waived its 65-year-old age limit for applicants.

What can we expect from her tenure at the IMF?

Ms Georgieva has been appointed for a five-year term, starting on 1 October.

Speaking after her selection by the IMF’s executive board, she described herself as “a firm believer in its mandate to help ensure the stability of the global economic and financial system through international co-operation”.

She added: “It is a huge responsibility to be at the helm of the IMF at a time when global economic growth continues to disappoint, trade tensions persist, and debt is at historically high levels.”

She said the IMF’s long-term aim was to support sound monetary, fiscal and structural policies to build stronger economies and improve people’s lives.

“This means also dealing with issues like inequalities, climate risks and rapid technological change,” she said.

“My goal is to further strengthen the Fund by making it even more forward-looking and attentive to the needs of our members.”