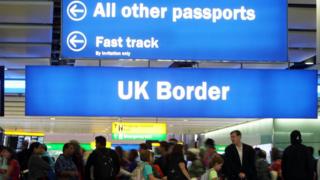 Boris Johnson and Home Secretary Priti Patel are expected to set out their immigration reforms, including a drop in salary threshold for some migrants, at a cabinet meeting on Friday.

Currently, skilled migrants from outside the EU need to have a job offer with a minimum salary of £30,000.

The BBC understands ministers plan to lower this threshold to £25,600.

Workers from the EU will face the same rules once the transition period for leaving the EU ends on 31 December.

Workers earning less might be allowed to make up “points” elsewhere in order to be granted a visa if they work in a sector with a skills shortage.

Points will also be awarded for speaking good English or for having an outstanding educational background.

It comes after the independent Migration Advisory Committee (MAC) last month made a series of recommendations for a post-Brexit transition period immigration system, including lowering the salary threshold for skilled migrants to £25,600 in order to help recruit teachers and skilled NHS staff.

The committee also criticised the UK’s current complex immigration system, where non-EU workers can attempt to qualify for a range of visas.

The prime minister made it a key pledge during the election campaign to introduce a points-based immigration scheme, based on Australia’s, for when existing EU freedom of movement rules end.

Under those rules, workers from the EU and European Economic Area countries can come to the UK to live or work without a visa.

The MAC has said there is no such thing as a “perfect” immigration system, with benefits and trade-offs in various parts of the economy.

It said whatever policies the government decides, it must work quickly to get something in place for after the transition period ends.