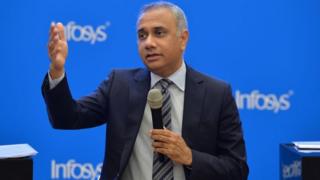 Infosys CEO Sahil Parekh has not responded to the allegations

The probe follows complaints by a group of whistleblowers against the CEO and CFO, the company said in a statement.

Infosys shares plunged 16% after a letter with the allegations was leaked to local media on Monday.

One of India’s biggest success stories, the company is also Asia’s second-most valuable IT services firm.

Infosys said the complaints “are being dealt with in an objective manner”.

“Additionally, to ensure independence in these investigations the CEO and CFO have been recused from this matter,” its statement said.

In a letter dated 20 September 2019, a group of Infosys employees accused CEO Sahil Parekh of “unethical practices” to “boost short term revenue and profits”. They also alleged that CFO Nilanjan Roy was “compliant”, and claimed to have “emails and voice recordings” that they said supported their allegations.

Mr Parekh and Mr Roy have not commented on the allegations.

Infosys said that the board or senior executives had not received the emails and voice recordings referred to in the letter, but it would probe the allegations to the “fullest extent”.

The letter is addressed to the company board. But, according to media reports, it was also sent to the US Securities and Exchange Commission as Infosys shares are traded on the New York Stock Exchange.

Founded in 1981, Infosys is often seen as the poster child of India’s technology boom. It launched with seven engineers and just $250 (£200), and has grown into a $11.8bn enterprise with a large global presence.