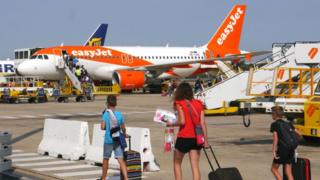 The Committee on Climate Change says a “frequent flyer levy” would help curb the growing demand for air travel.

Analysis shows that 70% of UK flights are made by a wealthy 15% of the population, with 57% not flying abroad at all.

The government says it will study the recommendations.

Aviation is set to be the biggest source of UK emissions by 2050. And at the moment, ministers are planning for an increase of up to 49% in flying.

But the committee says growth should be limited to 25% of current levels.

The CCC said frequent flyers were a large part of the problem, but it is not clear how a levy would work in practice.

For instance, would it apply to businesses at a time when the UK wants to stimulate trade with other nations? And how would you stop people pretending their flights were for work purposes to avoid paying it?

Other solutions could include increasing taxes on airlines, or restricting airport capacity, the committee said.

But it warned that if the planned expansion of Heathrow airport went ahead, it would leave very little growth room at other UK airports.

The government has been hoping to solve problems of aviation emissions through new technology, including battery-powered short-haul planes and long-haul planes running on sustainable biofuels.

The committee says aviation emissions could be reduced by about 20% from today to 2050 through improvements to fuel efficiency.

But electric planes will only be suitable for small short-haul journeys for the foreseeable future, critics say.

What is more, the aviation industry has been struggling to develop adequate biofuels. And all plant-based material is likely to be contested by different industries as the century wears on.

In a letter to Transport Secretary Grant Shapps, the committee chairman, Lord Deben, writes that the industry is “highly unlikely” to be able to eliminate emissions by 2050 by technical means.

He warns that contrails – the trails of condensed water left by aircraft at high altitude – add to the warming impact of flying, even though currently their effects are poorly understood.

Currently the airline industry is hoping to counterbalance its emissions through the controversial practice of offsetting, in which firms agree to pay for, say, tree-planting in developing countries.

But many such schemes have been discredited.

Cait Hewitt, from the Aviation Environment Federation, said: “British people currently take more international flights than anyone else in the world, but there’s a growing public recognition that this feels out of step with the action we need on climate change.

“The government’s dodged the issue of aviation emissions for too long. It’s worth remembering that demand for aviation growth is being driven by a minority of frequent flyers – 70% of UK flights are made by just 15% of the population.”

Neil Robinson, from the industry group Sustainable Aviation, urged the government not to adopt stand-alone UK policies on aviation pollution.

He said: “By investing tens of billions of pounds in new, cleaner aircraft we have already decoupled growth in aviation from growth in emissions, and as a global industry we have a long-established plan to halve our emissions by 2050.

“Carbon reduction, however, is a global issue requiring a global response, with governments and industry working closely together for emissions to be managed within an international framework.”

A government spokesman said: “We are also committed to setting a clear ambition for the aviation sector and will carefully consider the advice of the Committee on Climate Change when we publish our position on aviation and climate change for consultation shortly.”