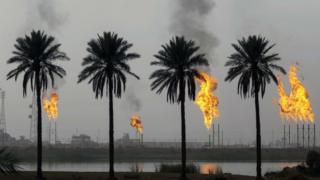 Oil prices have jumped after at least two airbases hosting US troops in Iraq were attacked.

Crude oil jumped by as much as 4.5% to $65.65 per barrel in Asian trade on concerns that this could disrupt oil supplies from the Middle East.

So-called safe haven assets, like gold and the Japanese yen, also rose sharply on the news.

At the same time global stock prices were sent lower on concerns over the growing conflict in the Middle East.

Iranian state television said the attack was a retaliation for the killing of the country’s top commander Qasem Soleimani.

The attack happened just hours after the funeral service of Iranian General Qasem Soleimani, who was killed by a US drone strike on Friday.

His death had raised concerns that the conflict between the US and Iran could escalate further.